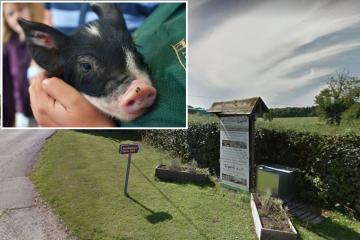 A SAFARI park next door to the Duchess of Cambridge’s family home has been put up for sale for a guide price of £1.5m.

The 44-acre deer safari park, a popular attraction to those who visit the farm, is also included in the sale price.

ALSO READ: This plot of land is going under the hammer and could be YOURS to own

The site consists of a number of buildings, including a café, indoor play and farm office, along with other buildings for livestock and an equipped play area.

Estate agent Knight Frank said there is the option for further development on the site, adding that there is the potential to expand and enhance the facilities.

It adds that there is also, subject to planning, “scope for redevelopment of the property for other uses”.

The farm has been developed by the current owner, Rupert Hartley-Russell, over the last three decades.

It started in 1986 as a strawberry ‘pick your own’ enterprise, but over the years has become a fully diversified tourism and visitor attraction.

Recently, five ‘glamping’ tents have been built at the park.

Knight Frank says the glamping units are operated under the Featherdown brand, which “adds further diversity to the business”.

Bucklebury Farm Park has been contacted for a comment.

Knight Frank confirmed the site was under offer, but could not share any more information due to a confidentiality clause.