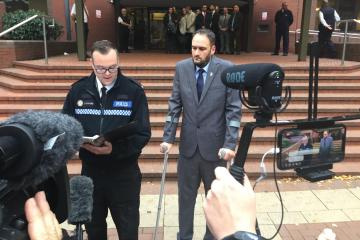 A POLICEMAN who suffered a shattered pelvis when he was run over by a car thief five days before the death of PC Andrew Harper has backed calls for tougher sentences.

PC Gareth Phillips, of the Central Motorway Police Group (CMPG), said he was totally behind the campaign for “Andrew’s Law” and believes early release on licence should be scrapped for offenders who attack emergency workers.

Speaking a week after two of PC Harper’s killers were told they will only serve two-thirds of their 13-year sentences in custody, PC Phillips said he was lucky to have no memory of the moment he was hit by a hijacked police BMW last August.

The 43-year-old officer sustained life-threatening multiple injuries in Moseley, Birmingham, and has only recently returned to duty working in a control room.

Birmingham Crown Court was told Hussain was Tasered at the wheel of a stolen Range Rover but struggled past officers into a police car, ran over Pc Phillips, and then sped away at up to 97mph.

The court heard the 29-year-old was apprehended by armed police in Sparkbrook after being tracked by a helicopter.

Speaking to the PA news agency at West Midlands Police HQ, PC Phillips said he was still in daily pain and waiting to learn if he will face further operations to remove metalwork from his pelvis and spine.

The constable, whose wife is a police officer, said he had not viewed full video footage of the incident in which he was hurt on August 10 last year.

“I tend not to think about the day to be honest because for me it’s more about going forwards and trying to get better,” he said.

“I think being knocked out for that few seconds where it actually drove over me has probably benefited me in a strange way because that’s probably the bit you don’t want to remember.”

The family of PC Harper have launched campaigns for tougher punishments for those who kill police officers.

His mother Debbie Adlam has called for a minimum term of 20 years for anyone who takes an officer’s life, with no chance of parole during that time.

PC Harper’s widow, Lissie Harper, has launched her own campaign, backed by the Police Federation of England and Wales, for full-life prison terms for those who kill members of the emergency services.

Henry Long, 19, and 18-year-olds Jessie Cole and Albert Bowers were sentenced on July 31 for the manslaughter of PC Harper, who was dragged to his death by a crane strap attached to a getaway car.

The case also led to a call by Northamptonshire Police Chief Constable Nick Adderley for whole life sentences for “those who set out to commit a crime” in which an officer is killed.

“I think sentences, not only for people who attack police officers, but emergency workers full stop, should be stronger than they are.

“I think there needs to be more consistency over the sentencing as well and what they are doing is amazing – I fully support it.

“I hope it succeeds.”

PC Phillips, who learned of PC Harper’s death a day after medical staff in Birmingham had taken him off a ventilator, added: “Something needs to change, doesn’t it, because people don’t seem to have any qualms any more with assaulting police officers, or the paramedics who were stabbed the other week.

“To have some backing or support from the court network through sentencing would be a huge step forward.”

PC Phillips, whose father is a retired officer, went on: “On a daily basis people will do ridiculous things for seemingly minor crimes.

“Maybe stricter sentences or harsher sentences will make people not want to take those chances.

“None of us should have to come to work and face the possibility of not being able to go home at the end of your shift.”

Asked for his view of criminals in similar cases being given early release on licence, PC Phillips replied: “I think they should serve their full sentence.

“It goes back to the deterrent thing.”

During media interviews to mark his return to work, PC Phillips also thanked well-wishers who wrote to him during his rehabilitation.

He said: “When you look at the amount of people who wrote me best wishes cards, and I had cards from all around the country and things sent to me, I would say the majority of the public have got massive respect for us.

“I would say thank you to everyone who did write to me because that really helped when I was in hospital.”

West Midlands Police gave PC Phillips a police puppy to walk during his efforts to recover, while he helped to raise £1,500 for the intensive therapy unit at Birmingham’s Queen Elizabeth Hospital by selling pin badges of the CMPG’s Perry Bear mascot.

PC Phillips explained: “Whilst I was in the QE I got in touch with the chap who drew him originally and he re-drew him with his arm in a sling and his leg in plaster and we had him made into pin badges, which we then sold.

“We have managed to raise £1,500, which has been donated back to the ITU at the QE, who looked after me, as a bit of a thank you for making it that I’m still here.

“It was just a nice way of giving something back to them.”