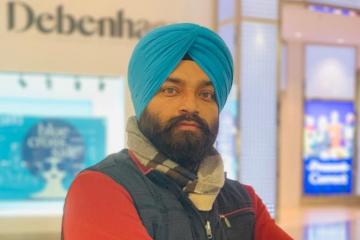 A SIKH taxi driver from Reading has been left ‘shaken’ after being attacked by four passengers who vandalised his car and abused him with racial slurs.

Vaneet Singh, 41, has lived in Tilehurst since 2008, and said he has never before been attacked in this way.

ALSO READ: Racial and religious hate crime on the rise in Reading

The father-of-three said he had been working a night shift and picked up four passengers from the Grosvenor Casino in Reading early on Sunday morning (September 20).

Shortly after leaving, one of the men began behaving in a disruptive manner, playing music loudly from his phone and later throwing a head rest out of the window.

The same man attempted to remove Mr Singh’s turban, asking “are you Taliban?”

Describing the experience, Mr Singh told The Chronicle that he had felt very intimidated and “feared for his life”.

“I asked him to please stop touching my head and my turban but he carried on,” he said.

“I explained it is a religious symbol and that I didn’t want him to touch it but he did it even more.

“He became very aggressive, changing his mind about where to drop him off and asking ‘are you taking me then or not?’

“He and the others were punching and kicking my seat and I said ‘please don’t do that’.”

Mr Singh, who also works as a music teacher, said that he had been wearing a face mask due to Covid-19 and this was only his second shift back as a taxi driver since lockdown.

When he asked the men to wear theirs as they entered his taxi, they refused.

He hadn’t realised that the men had removed a headrest and thrown it out of the window until later in the journey, when he asked what had happened to it.

He added: “It was a horrible experience.

“When I got home I couldn’t sleep all night and was very unwell, I am diabetic and I was having breathing problems so my wife called an ambulance.”

READ MORE: Police step up manhunt for attacked who chased man before stabbing him several times

Mr Singh, who described himself as an active and charitable member of the Tilehurst community, said that he doesn’t feel he could work a night shift again and has been left scarred by the experience because he was concerned the behaviour would escalate and that the men may have become violent.

He added that, when he first picked the four men up there didn’t seem to be a problem, but as the journey went on their behaviour “totally changed”.

Thames Valley Police has confirmed it is investigating the reports of racially aggravated public order, common assault, and criminal damage.

It happened about 11pm on Saturday (September 19) starting at Rose Kiln Lane and into Hampshire.

No arrests have been made.