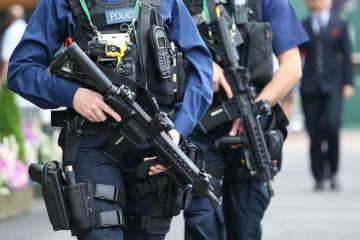 ARMED police are being deployed to fewer incidents in the Thames Valley, figures reveal.

Meanwhile, the number of armed officers in the force fell from 244 to 234 over the period.

That was higher than a decade earlier, when there were 193 armed officers in Thames Valley’s ranks.

It was a similar picture across England and Wales, where the number of firearms officers fell 2 per cent to 6,518 by March 31, ending a three-year upward trend.

The fall comes despite the government’s £143 million recruitment drive – announced in 2016 in the wake of terrorist attacks in France – to attract 1,500 extra firearms officers over a five-year period.

Nationally, the number of police firearms operations fell for the first time in four years to 19,372, down 4 per cent from 2018-19.

During that time, officers’ guns were fired in just five incidents, eight fewer than the year before.

He was shot dead by armed officers.

He added: “A mark of the quality of training that armed officers receive is how infrequently they have to use their weapons.

“Our most highly trained armed officers in UK policing, counter terrorism specialist firearms officers, continued to significantly increase in 2019-20 and provide a highly capable and resilient resource to deal with the highest threats in terrorism and serious organised crime.”

Mr Chesterman said an increase in armed response vehicles also means forces can respond to major incidents such as terrorist attacks “faster and with greater numbers”.

Steve Hartshorn, the Police Federation of England and Wales’ lead on firearms, said armed police are “fully accountable”, and make “split-second decisions based on knowledge, skills, training and reading of situations”.

A Home Office spokesman said armed officer numbers might have been impacted in the short-term by the coronavirus pandemic.

He added: “More than 4,000 officers have already joined as part our pledge to recruit 20,000 additional officers in the next three years and the policing system has been given its biggest funding boost in a decade.”

He also said the multi-million-pound recruitment programme has resulted in a “steady uplift” of armed officers since 2016.