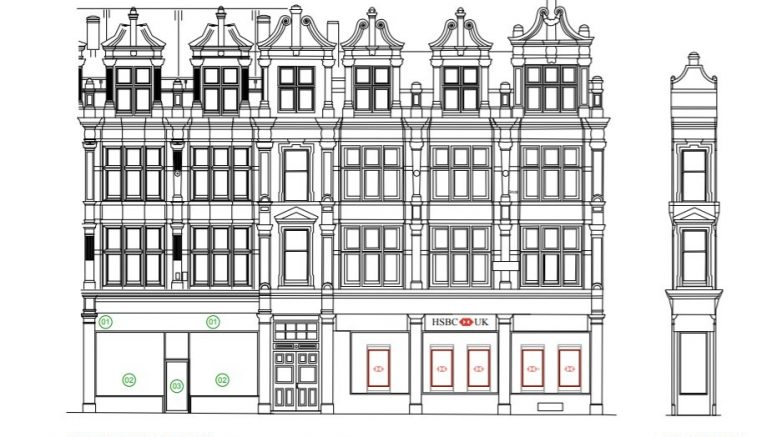 A grade II listed building in the town centre – home to HSBC – is set to be split in two, under new plans submitted to Reading Borough Council (RBC)

HSBC has decided to “vacate and surrender” part of the building at 26-28 Broad Street, returning it to the landlord.

The building is on the corner of Broad Street and Queen Victoria Street.

The unit will be separated to form two separate units, with internal walls reinstated.

The Broad Street part of the building will remain as it it, with part of the Queen Victoria Street section becoming another unit, as shown in the image below.

The planned split of the building

All HSBC signage on the part of the building that the bank is vacating will be removed and ATMs will also be removed.

The landlord or a new tenant at the vacant unit will submit a separate application in the future to redevelop the site once HSBC has vacated.

Further works will also be required at the vacant unit to reinstate a staircase.

The bank is one of nine on Broad Street, the town’s main street for shopping.

The application to planning permission was submitted to the council on April 30.

26-28 Broad Street has significant architectural features, including grey brick with terracotta dressings. HSBC say the works will compromise the character of the grade II listed building.

There are no proposed works that directly affect the existing structure or any existing original historic features of the building.