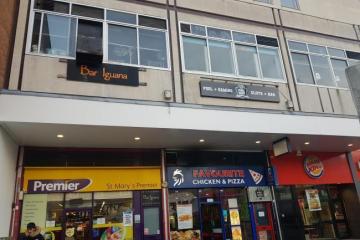 A bar and shop could lose their licences next week, with a hearing back on at Reading Borough Council (RBC) after Covid-19 delays.

Thames Valley Police (TVP) is calling for Bar Iguana and Premier, both in St Mary’s Butts, to lose their licence due to “a number of violent incidents in and around the premises” including “large-scale disorder” on December 21, 2019.

The licences of the two premises, both held by Mohammed Saleem, could be revoked or the hours could be dramatically reduced at next Thursday’s (July 9) hearing.

Mr Saleem is also the licence holder for Favourite Chicken and Pizza, which is next door and is also set to have its licence reviewed, on July 16.

Hearings for all three businesses were adjourned on March 24 due to the ongoing coronavirus pandemic, having already been previously delayed due to late submission of evidence from TVP.

PC Simon Wheeler suggested the combined impact of the three shops (including Favourite Chicken and Pizza) is the reason for issues in St Mary’s Butts.

“The licence holder has not been able to manage the disorder these people generate.”

Other concerns raised by the police include:

The area ranks number one for crime in the town centre between 11pm and 6am but supporters say the bar and shop are not the cause of issues.

Despite the comments from police, a dozen residents have written to the council asking it not to reduce the hours of the three businesses.

“Unwarranted”: Response from the licence holder

Mr Saleem has rejected many of TVP’s criticisms.

In response to the scrutiny, he said a reduction in hours is “unwarranted” and said the shops assist the town in maintaining a vibrant town centre economy and the authorities by providing CCTV and security.

What could happen at the licensing committee?

TVP want the licences to be revoked, which would prevent Bar Iguana and Premier from selling alcohol.

If RBC decides not to revoke the licence for Bar Iguana and Premier, police want one of the premises to be removed from the licence.

If the committee chooses not to revoke or suspend the licences, TVP want the hours to be reduced dramatically.

Open: 10am-3am, Sun-Thurs, until 4am on Friday and Saturdays

Sale of alcohol: 10am-2am,  Sun-Thurs, until 3am on Fridays and Saturdays.

And how they could change