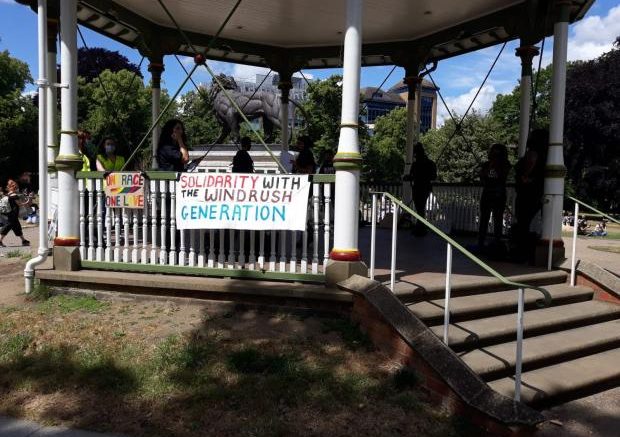 HUNDREDS of people have gathered in the town centre today to show their protest against racism and support Black lives.

A peaceful protest is taking place in Forbury Gardens today (Saturday, June 13) as people come together to show their support for Black Lives Matter.

People listened to a speech at midday reciting lyrics from rapper Dave’s ‘Black’, which shares an important message about black history.

Supporters are holding placards with messages such as  ‘I can’t breathe’, ‘Black Lives Matter’, ‘Defund the Police’, ‘To be black is not a crime’ and more.

The protests across the UK were sparked by the death of George Floyd in the US last month.

The 46-year-old African American died after a police officer held him down by pressing a knee into his neck for almost nine minutes in Minneapolis on May 25, provoking riots in many US cities and demonstrations across the world.

Since then, Reading held it’s first Black Lives Matter protest on June 5 where crowds of people gathered outside Reading’s Town Hall for the start of the protest at 1pm.

There were speeches before the march took protestors to the town’s black history mural around 2pm, where crowds and crowds of people could be seen crossing the IDR.

The crowds also fell silent, as many dropped down to one knee, to pay their respects in memory of George Floyd.