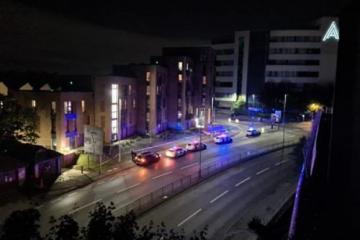 A MAN will be brought before the courts tomorrow after two men were knifed in Bracknell.

The two men were stabbed after a fight broke out in Newlands Place about 11pm on Thursday, August 27.

One man, in his 20s, was rushed to hospital with serious injuries while the other, also aged in his 20s, had head injuries.

ALSO READ: ‘Group of men’ attack man for his watch

Two men were arrested soon after on suspicion of grievous bodily harm.

Thames Valley Police today confirmed Matthew Viccars, of Pitcroft Avenue in Reading, has been charged with one count of wounding with intent and one count of possessing an offensive weapon.

The 38 year old has been remanded in custody and will appear at Reading Magistrates’ Court tomorrow (August 31).

Police also confirmed the 28 year old arrested on suspicion of GBH has been released on bail to appear at Loddon Valley Police Station on September 25.