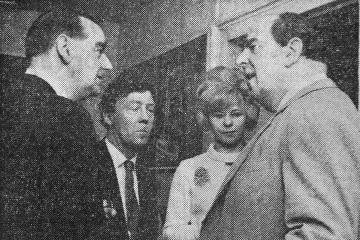 MEMBERS of Hurst Bowling Club, the second oldest in Great Britain, welcomed a party of Chelsea Pensioners in 1964, after they had played in London the previous day.

The scarlet tunics of the Chelsea players provided a colourful spectacle for onlookers, who included Alfred Gillard, the former landlord of the Jack of Both Sides, Reading, who had served in the First World War.

Parishioners at Earley St. Peter’s Church were feeling on top of the world after four new pinnacles were restored to its tower, 34 years after the original ‘spires’ were removed.

The work, which cost £4,700, had been paid for by Sidney Cook, born in the parish, who wished to see the tower restored as he remembered it in his youth.

Speaking to the Chronicle, Mr. Morley thought the exhibition was a worthy attempt to brighten Reading up: “It is a good thing to make money out of art, although some consider it to be next to leading a life of sin.”

Nine Jersey cattle from Bradfield Farm, Stanford Dingley, posed for a snap with farmer Brian Broadbank, before heading off to Gatwick Airport, as part of an export deal with Turkey.

The heifers, Montrose Bluebell and Montrose Fairy Designs Pat, would join other stock which had been purchased by British Livestock Exports, on behalf of the Turkish Government.

The ‘Magazine Page’ section of the Reading Chronicle featured a detailed history feature about one of Berkshire’s most historic structures, Bisham Abbey.

Built on the banks of the Thames, the Knights Templar (a powerful order of Knights in the Middle Ages) originally had a preceptory there, which was incorporated in the manor house in 1260.

Originally named Bisham Priory, it was the resting place of many Earls of Salisbury, after they established a priory on the site, none of which now remains.

Sir Philip Hoby, a gentleman to the Privy Chamber of Henry VIII, purchased the estate from the king in 1553, narrowly ‘gazumping’ Anne of Cleves, his divorced (4th) wife.

The ghost of Lady Elizabeth Hoby was said to haunt the building, with local legend saying it was the mistreatment of her son that makes her ghost walk the corridors of the Abbey to this day.

When officers of the Royal Berkshire Regiment formed a guard of honour at the wedding of Christopher Smallbone and his bride Margaret Cletheroe, they knew that the bridegroom was lucky to be at his own wedding.

Christopher survived the Lakonia liner disaster, which killed 128 passengers in December 1963 and been badly injured in a car crash on his return, only two months before the big day.