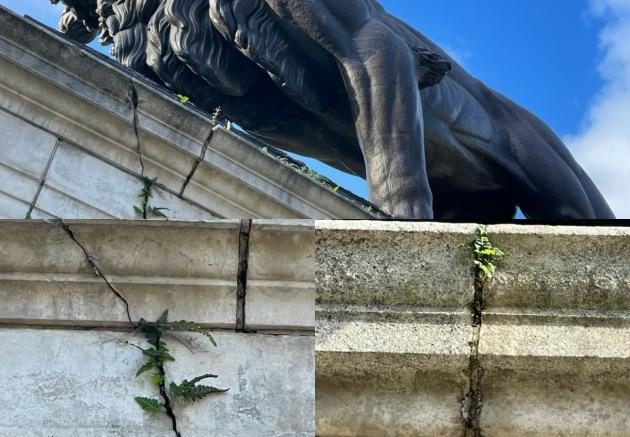 A call has been made to restore the stone that holds Reading’s iconic lion statue in Forbury Gardens.

The statue, called the Maiwand Lion, was unveiled in 1886 to commemorate the deaths of 329 men from the 66th Berkshire foot regiment who were killed during the Second Anglo-Afghan War, which ran from 1878 and 1880.

The name Maiwand comes from the Battle of Maiwand in 1880 which was fought in Kandahar Province, Afghanistan and was a defeat for British Imperial forces.

Recently, cracks have started to appear on the Portland stone plinth that holds the lion, leading to concern about the memorial’s future.

Councillor Harry Kretchmer (Conservative, Emmer Green) said: “Reading’s famous Forbury Gardens Lion is sitting on a plinth that is suffering from some serious damp issues, with plants and weeds growing from cracks.

“Should the council act now to save a big bill later?”

A spokesperson for Reading Borough Council explained that works were planned last month but were disrupted by Her Majesty Queen Elizabeth II’s death.

The spokesperson said: “Specialist conservation contractors, Cliveden Conservation – the experts who also work to restore, protect and conserve the Abbey Ruins – have been commissioned to carry out work on the Maiwand Lion.

“This work will necessitate scaffolding around the statue and was scheduled for September 2022 so the statue would be ready for Remembrance in November, but the work could not proceed as planned as the Forbury Gardens were needed for the screening of the funeral of Her Majesty Queen Elizabeth II.

“This is specialist conservation work that cannot be undertaken successfully in cold and/or wet conditions so the restoration has been rescheduled for spring 2023.

“We look forward to seeing the restored Maiwand Lion at the heart of next summer’s Forbury Gardens festivities.”

Additionally, Micky Leng (Labour, Whitley) lead councillor for planning and assets, said:  “Obviously moisture can get in there during the frost and damage it, so we’re waiting for the frost to disappear so the contractors can carry out proper repairs.”

Cllr Leng also explained the maintenance works have been planned for a while and have been secured through community infrastructure levy (CIL) funding obtained from developers, which has been used to enhance town centre monuments, war memorials and public art.

He added: “It’s obviously a centrepiece of Reading, probably its most well-known monument, it’s a monument that deserves to be in full splendour as soon as possible.

“We were conscious that we didn’t want scaffolding around it for Remembrance Sunday.