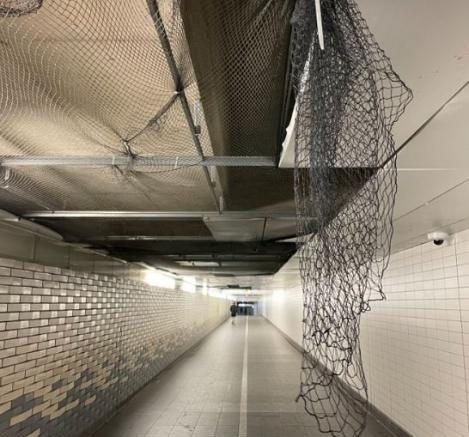 A councillor has called for the ceiling of the underpass at Reading train station to be fixed after netting was seen hanging from it.

Councillor Harry Kretchmer (Conservative, Emmer Green) took a picture of the netting hanging from the ceiling, posing a potential hazard for those using the underpass between that north and south exits of the station.

Cllr Kretchmer said: “Any chance we can finally get the Reading station underpass ceiling fixed please? It looks truly awful.”

He highlighted the issue in a tweet to Network Rail and Reading Borough Council.

The responsibility for the underpass lies with the council.

In a reply to the Local Democracy Reporting Service, a council spokesperson said: “The netting hanging down from the ceiling in the station underpass was fixed last week.

“Reading Borough Council has already put a scheme in place for the current financial year to make further improvements to the underpass to benefit residents using it.”

Cllr Kretchmer has questioned why CCTV is not proving effective at preventing damage in monitoring the underpass, as the ceiling tiles were also vandalised in 2017.

He said: “This has been a persistent problem for years.

“It’s also been one of those issues that has got worse the worse it’s got – people see it in a bad state and knock off another ceiling tile.”

The underpass is technically for pedestrians only, with cyclists being encouraged to dismount and walk their bikes through it rather than cycle through it.