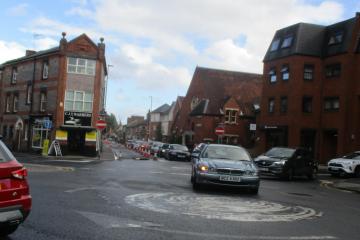 Residents and businesses have slammed a new one-way system in Caversham which they say is causing traffic chaos.

Temporary one-way restrictions have been introduced by Reading Borough Council (RBC) on Gosbrook Road and Westfield Road this week as part of a series of active travel and social distancing initiatives using government emergency coronavirus funding.

More than 650 people have now signed a petition opposing the one-way system, with a huge leap in the number of signatures since the scheme was launched earlier this week.

Sara Fullbrook, who lives on Westfield Road, previously called the plans an “environmental disaster” which would “adversely affecting both Caversham residents and tens of thousands of commuters”.

Speaking to the Chronicle after the scheme had been introduced, she said: “The full horror of this incompetent and unwanted scheme has been unveiled.”

The one-way system forces cars to go up Prospect Street and then down Westfield Road if going eastbound.

Gosbrook Road, from the Archway Road to Westfield Road junctions, is split into one lane going west for motor traffic, and another lane which goes both ways for cyclists and pedestrians.

READ MORE: Pub landlord could be in hot water with council after building swimming pool without permission

The scheme is part of a wider response to the Covid-19 pandemic which aims to create more space for pedestrians and cyclists.

Dozens of people have raised their concerns about the plans on social media and on the petition page, which you can view here.

How have residents responded?

Jean Causer said: “I live at the bottom of Wolsey Road and it’s a nightmare trying to get out, and then hoping for a chance to turn up Prospect Street.”

Siân Putnam, a resident of nearby The Willows, agreed, saying it is making it hard for her to leave and enter the street she lives on.

Lucy Llewelyn said the scheme is “causing chaos”, while Andy Butler said the plan “does not help anybody in what is now a completely gridlocked Caversham with major junctions paralysed”.

Richard Wilson said it makes the situation worse for cyclists, with Stuart Creech claiming the traffic is now worse than ever.

And what is the impact on business?

Lindsey Sharp said the scheme is not helping anyone and is “affecting our businesses that have had it hard enough this year already.”

A to Z Engineering, based on Wolsey Road, spoke to the LDRS to express its astonishment at the scheme.

Vladimir Miljus, chairman of the company, said: “I don’t think they could have made it worse.

“When school starts, there is going to be enormous traffic. It is mind-boggling.”

He said a van trying to deliver to his business on Friday morning (August 28) accidentally went the wrong way and had to drive through the temporary infrastructure blocking off the eastbound lane to vehicles on Gosbrook Road.

Mr Miljus also raised concerns about the safety for cyclists having to use the roundabout and said someone would get badly injured or killed.

A council spokesman said: “In this area, the aim is to reduce speed limits and for the lane closure to provide more space for pedestrians and cyclists.

“We appreciate that changes like this are likely to take a while for people to get used to and there may be aspects we will need to alter as a result of any feedback we receive.”

The scheme is temporary and the council says its length of stay will be closely reviewed.

RBC says some of the active travel schemes could become permanent but it will review each scheme’s effectiveness first and consider feedback from residents.

It will also hold public consultations before making any scheme permanent.

The council has encouraged residents to provide feedback on the types of schemes it should be considering using www.widenmypath.com