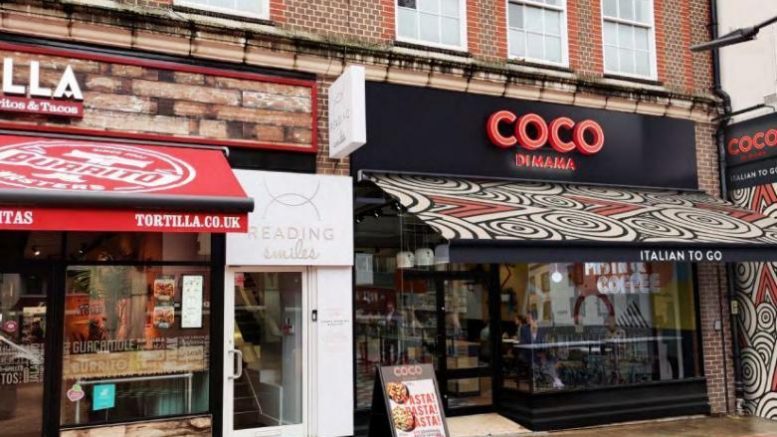 The company behind a popular Italian restaurant has revealed when it hopes to open in Reading’s town centre.

While a concrete date has not been set, the company is confident that it will open later this year.

In June, Coco di Mama’s owning company the Azzurri Group submitted a plan for it to takeover the shop at numbers 4-5 Broad Street, which was previously occupied by the Ecco shoe store.

However, that plan has since been withdrawn, prompting questions over whether Coco di Mama had abandoned its plan to open in Reading.

The company has since confirmed that is not the case.

“We will probably be opening at the end of November, we think that will be the date we’ll be going in.”

The spokesperson added it could open earlier depending on the legal situation.

“Reading Smiles are going to move into the unit next door and make that unit bigger.”

The legal issue surrounds the separation of the address into two units, A and B, so that Coco di Mama and Reading Smiles dental clinic can use the parts of the building each company wants.

The spokesperson added: “This will be just be quite a quick fix, and is sitting with lawyers for us and the landlord.”

The first plan for Coco di Mama has been withdrawn so that an accurate one can be submitted in the future that recognises that the building will be split between the chain and Reading Smiles.

A fresh plan is set to be submitted soon.

“Obviously its exciting to move out of London, we have looked at opening in Manchester and Birmingham, and I’m sure we will later on down the line, but we think people in Reading will be more familiar with the brand having seen it in the capital on visits and as commuters.

“It’s an interesting town we think will be full of good Coco di Mama customers.”

People in Reading can currently enjoy Coco di Mama food for delivery only, as menu items are prepared and cooked from the Zizzi in The Oracle for delivery via the JustEat, Uber Eats and Deliveroo apps.