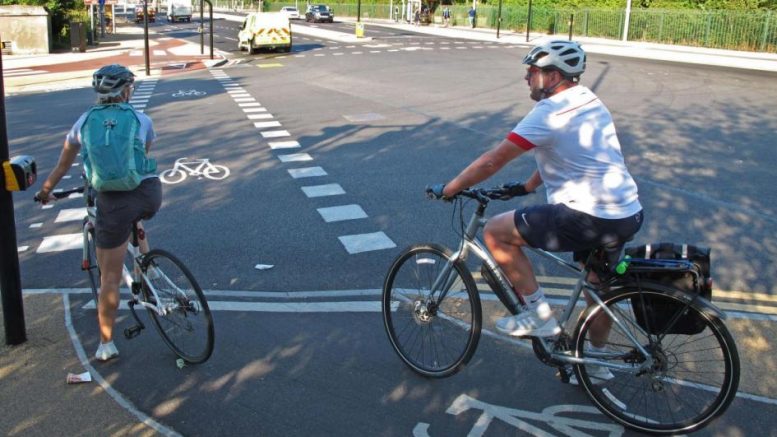 In this week’s column, Jason Brock, the leader of Reading Borough Council, welcomes measures to help cyclists in the town, which include a consultation on opening the station underpass to cyclists and the work that’s due to begin to provide a safe cycling route in South Reading. Cllr Brock writes:

It has been a positive couple of weeks for residents whose preferred method of getting around town is on two wheels (with rotary pedals, anyway).

Reading is distinctive place in many ways. Geographically it is of course a town split in two by its rivers and its railway line, which can present us with some challenges. It has therefore always seemed counter intuitive to me that a key strategic north-south route traversing Brunel’s Great Western Railway line, albeit underground, is prohibited to cyclists.

As my colleague Councillor Page likes to remind us, it was during the early planning stages of the redevelopment of Reading Station that it quickly became apparent Network Rail intended to close this essential link for good. As a Council we knew how unpalatable this would be with residents, particularly those who live north of the river, which is why we insisted that the link was non-negotiable. While the battle with Network Rail was eventually won, Reading was left with a poorly designed subway for which a Cycling Prohibition Order was necessary due to height and width clearances being substandard for cyclists. We were also left the unenviable liability of repairing the vandalised low ceiling panels which quickly became a regular target for worse-for-wear hooligans of a weekend evening, as residents will know.

We knew at the time the subway cycling ban was far from ideal, but we also knew with the redevelopment of major sites such as Station Hill or the Royal Mail site on the horizon, it was something we would need to address in the future.

READ MORE: Consultation to allow cyclists to use Reading station subway given go ahead

When the redeveloped Reading Station we know today opened back in 2013, the Council opened with it modern new interchanges to the north and south of the station, enabling people to switch seamlessly from bus, bike, or taxi to rail. Two years later, in 2015, the Council opened Christchurch Bridge, providing a striking new pedestrian and cycle link from the Caversham and Christchurch Meadows, across the Thames and towards Reading Station. Not only a Reading landmark, but another missing link and piece in the jigsaw.

With planning agreement funding now secured to remove the lowest of the ceiling panels in the subway, earlier this month my councillor colleagues approved a public consultation on the removal of the Cycling Prohibition along the station subway in order to unblock the barrier and enable safe cycling through this key strategic route, linking to station interchanges and the aforementioned Christchurch Bridge. This becomes all the more important now, with Station Hill and other developments forging ahead.

We are well aware of legitimate concerns raised about the prospect of cyclists speeding along what would be a shared pedestrian and cycle facility, but it’s fair to say that is also in practice an issue today – cycling ban or no cycling ban. By opening up this facility we hope to put in place some measures of control to reduce this. The reality is that the vast majority of cyclists who use the subway today are responsible and dismount, as they are currently supposed to, or at least keep their speed to a safe level.

Moving south and east, I’m also pleased to report that physical work will begin shortly on the permanent new Active Travel cycle lane along Shinfield Road. When complete, this will be an important new cycle lane extending between Christchurch Green and Whitley Wood Road, linking homes and businesses in the Whitley area to major employment and visitor hubs such as the Royal Berkshire Hospital and the University of Reading, as well as local centres and Reading town centre.

The Shinfield Road scheme is a pre cursor to yet another key ‘missing link’ cycle lane on the horizon, this time in the west along the Bath Road and Castle Hill. The Council has successfully secured £1.3 million of funding for the scheme from the DfT, which includes major improvements stretching from Berkeley Avenue, along the Bath Road to Castle Hill, then running over the IDR to Castle Street. This includes the reallocation of road space from general traffic to create segregated lanes for cyclists to and from the town centre. A public consultation took place over the summer and officers are now in the process of finalising designs.

And finally, onto one of our more controversial pieces of cycle infrastructure on Sidmouth Street, which colleagues recently agreed to make permanent. They did so in the full knowledge that, as it stands, the fully segregated cycle lane is not particularly well used and is not ideal.

Sidmouth Street does however form an important foundation for future bids for funding for new cycle lanes linking to it, including improving cycling links to the Kennet tow path and making enhancements to where it joins with the existing shared-use cycle path on London Road and Wokingham Road.

By keeping the Sidmouth Street cycle lane in situ, we give Reading the best possible chance of future successful bids for cycle infrastructure funding from Government. Removal of the scheme at this time would undoubtedly weaken our position in relation to future bids for funding.

For as long as I can remember there is a tension in Reading where various modes of transport compete for limited road space. In that respect we are no different to any other major town or city. What I do find frustrating though is when opposition councillors – particularly those of a green hue – who profess to support sustainable modes of transport like cycling choose to speak up against schemes like Sidmouth Street.

READ MORE: Cyclists hit out at missing signage on roads in Reading

They do so knowing that, taken in isolation and ignoring all context, it is an easy target for criticism. It is nevertheless heartening to know that that Labour is the party in Reading delivering and protecting cycle infrastructure so that we can build on progress made in the future, rather than calling for cycle lanes to be removed.

If the history of cycle infrastructure in Reading has shown us anything, it is that funding pots from the Department of Transport, whilst very welcome, are also piecemeal. The Council has little choice but to adopt a ‘jigsaw’ approach as a result. There remain a fair number of gaps, but over the past few weeks I’ve been pleased to see a few more pieces fall into place.