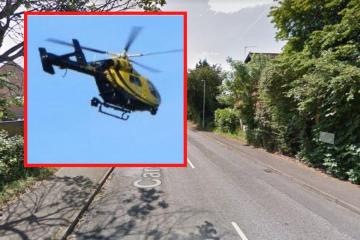 A PERSON has been taking to hospital after ambulance and police crews were spotted at the scene of a collision in Earley.

Reports are circulating that an emergency service helicopter recently landed at a field in Maiden Place at about 11.30am today (August 28).

South Central Ambulance Service (SCAS) said it was called to Carshalton Way to treat one patient.

A spokeswoman said: “We sent to the scene an ambulance crew and the Thames Valley Air Ambulance who were assessing and treating one patient.

“Following treatment at the scene the patient was taken onto Royal Berkshire Hospital.”

Footage on social media shows a helicopter close to the scene preparing to land.

Witnesses have also mentioned seeing a number of police vehicles and ambulances at the scene.

It is currently unknown what has happened, and Thames Valley Police have been contacted for information.