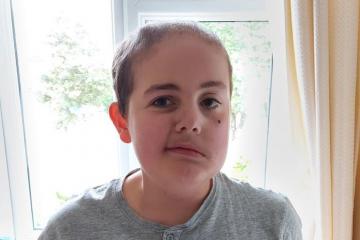 THE mother of a teenage boy with cancer has “hope again” after being given the go-ahead to fly to Mexico with her son for potentially life-saving treatment.

Toni Ilsley, the mother of 13-year-old Charlie, hopes this treatment will be the “third time lucky” for her son who was diagnosed with medulloblastoma, the most high-grade brain tumour found in children when he was eight-years-old.

Toni, Charlie and father Mark from Emmer Green were due to fly out to Mexico this week (Wednesday, June 17).

They plan to stay there for 25 days whilst Charlie receives Immunotherapy.

The family have been waiting for the go ahead to travel to Mexico since April.

Toni said: “It’s been like a race against time.

“We haven’t got time.

“We want to get there while he is well, get this treatment done while he’s well before he starts showing any signs of the cancer.

“It’s like a race against time, it’s been really stressful.”

After being given the news they could fly to Mexico for treatment for Charlie, Toni said she felt “really relieved” but then began to worry about other things.

Despite this, Toni said: “We have got hope again now it’s like there’s a chance again now.

Charlie begins his treatment on June 22 and the family still need to raise money to pay for the fees.

Speaking on Friday (June 12), Toni said around £9,000 is needed in total and will be paid to the hospital each time Charlie has treatment.

If Charlie needs to stay in intensive care it is another £10,000 per night to pay.

She said: “For anyone who has donated I want to say thank you so so so much. Every penny of that goes on treatment for Charlie. They sent him home three years ago to die and so far, I’ve managed to keep him alive for three years. Let’s just hope that this gives us another three years or another thirty.”

She said they are “really lucky” for all the support they have received from people.

She said: “Without everyone he wouldn’t be here. I’m so grateful for everything people are doing.

“It’s really horrible to ask people for money all the time but for Charlie I would do anything for him.”

If you would like to donate, please visit Charlie’s Just Giving page here.