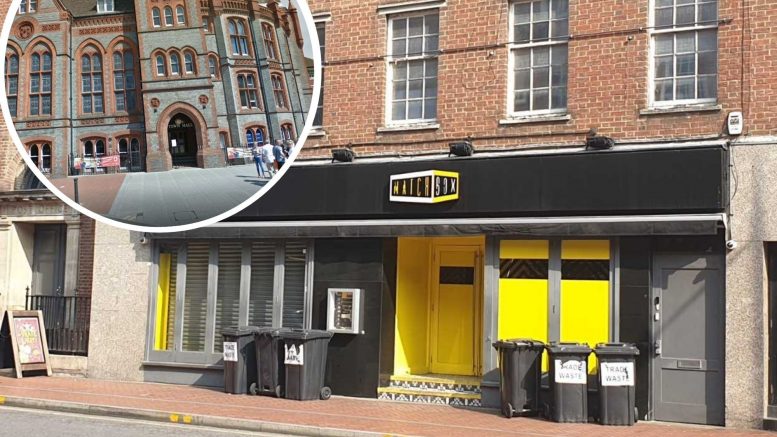 THE BURSAR of prestigious Wellington College was killed when his teenage son to hit him during horseplay and he fell backwards, tragically hitting his head.

An inquest has today heard how army veteran Malcolm Callender and his son Ewan had been playing a “game of slaps” when he reeled backwards and fell, fatally striking his head on the road.

Reading Coroners Court heard how 19-year-old Ewan was not keen on hitting his bigger-built 48-year-old father but wanted to make him proud, so did it, with horrific consequences.

Malcolm, who had slapped Ewan when they went out to watch football on April 12 last year, stood with his hands behind his back and said to his son: “Right, you can have your free shot.”

Witnesses saw Ewan clench his fists on Friar Street, in Reading, before he delivered the slap which sent Mr Callender senior backwards onto the road.

ALSO READ: Duke and Duchess of Cambridge stop off at Royal Berks as part of train tour

The coroner heard how more than 18 months after Ewan Callender was arrested by police at the scene, the Crown Prosecution Service decided they would not prosecute him for any offence.

Ian Wade QC, assistant coroner for Berkshire, explained during the inquest into Mr Callender’s death today that the slap should be seen as legal “horseplay.”

The inquest heard how Ewan, who had himself been the in the British Army for around three years, had been out with his private school bursar father and their friends on April 12, 2019, to watch Newcastle play football.

The 19-year-old son wiped away tears as he entered the witness box and answered the coroner’s questions about the night of drinking at the Yates and O’Neill’s bars in Reading.

CCTV footage in the bar which the coroner had viewed showed Mr Callender senior raise his hand and strike his son, who went to retaliate but instead embraced his father, the inquest heard.

“Dad slapped me around the face on the way out,” Ewan said, “just because we were messing around. It is just normal. There was nothing aggressive about it.

“It was when we were outside near the front door. Me and Luke were gonna stay out, dad was going to go home with his friends. We started walking towards the station, we must have been in mid-conversation. He [dad] said, ‘right, you can have your free shot’.

“I knew exactly what he meant, I get to slap him now. Luke was like, ‘come on, you do not want to do that because you know you are going to lose’.”

The coroner asked: “He was just persuading you that this was not a game that you were likely to win?”

The young man’s mother – Malcolm Callender’s wife – had told the inquest in her statement that the slapping between father and son was a common game they played.

Kathryn Morrison-Callender, also an Army veteran, said: “As a family, we would always be messing about with each other and we would be giving each other quick little digs in the ribs which we called ‘fingers of steel’.

“We would wrestle with each other where we would try to grab the other person and take them to the ground. Another game we would play was slaps.”

She added: “After Malcolm passed away I spoke to Ewan about what happened. From what he described, it sounded just like the games that they had been playing together since Ewan was a kid.”

After clenching and unclenching his fists, Ewan struck his father an open-handed slap with his right hand and Mr Callender senior fell onto the floor outside the Matchbox bar in Reading, the coroner heard.

As nearby security staff and other bystanders at the scene rushed to try to assist Mr Callender, Ewan was heard screaming “wake up Dad! Dad I love you!”, before police arrested him, Mr Key told the inquest.

Mr Callender senior was rushed to the Royal Berkshire Hospital where he was treated for an acute subdural haemorrhage but he died in the early hours of the following morning and a cause of death was given as “blunt force trauma to the head.”

A toxicology examination found Mr Callender senior was over twice the drink-drive limit for alcohol but had no other substances in his body.

Mr Wade said he would not reach a conclusion that Mr Callender had died from unlawful killing, explaining: “The law recognises that consent is a legitimate concept in the law of assault and the application of force that is consented to, is not assault.

“You are allowed to consent to the application of force in sport, after all if it were not so then every contact sport and every martial art would be against the law.

“You are also allowed to consent to the application of force in what is a rather Victorian way called horseplay. It seems to me that what took place here fulfils the definition of horseplay.”

Malcolm Callender, who lived in Gardens Cottage in the grounds of the famous Wellington College in Crowthorne, had been born in Tyne and Wear, Newcastle and left school at 15 to join the Army, the inquest heard.

Mrs Morrison-Callender told Mr Wade: “He always wanted to be a soldier, he would be playing with toy soldiers out in the garden.

“He joined the Royal Engineers and throughout the 1990s he went on a number of tours in Bosnia and he was gradually moving up the ranks.”

Mrs Morrison-Callender had met Mr Callender in 2000 when they were both posted at the same regiment of the 22nd Engineers, where she was a Lance Corporal and he was a Staff Sergeant.

After living in Germany as a couple and completing various postings, Mr Callender had been promoted to Captain and then Quartermaster.

“In 2012, Malcolm made the decision to leave the Army, he felt as if he had ‘been there and done it’”, his wife told the inquest.

In 2015, Mr Callender became the works and estates bursar at Wellington College after getting a call from an old contact he made during the military.

His wife said: “He ran his department like a little military unit. He would organise a number of different socials, from BBQs in our garden to getting everyone to do the Tough Mudder race.”