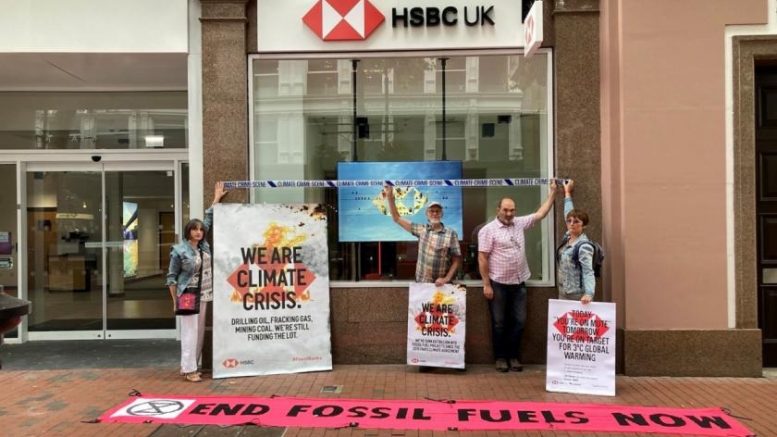 Climate campaigners Extinction Rebellion held a protest outside the HSBC in Reading town centre when it reopened after a months long closure.

The HSBC in Broad Street reopening yesterday (Monday, August 1) was met with an Extinction Rebellion protest, with campaigners claiming the bank helps fund oil and gas companies that are damaging the environment.

They also brought out mock HSBC advertising, stating “we are climate crisis” and “today, you’re ‘on mute’, tomorrow you’re on target for 3°C global warming”.

Campaigners have cited the ‘Banking on Climate Crisis: Fossil Fuel Finance Report 2022’ as proof of their concerns.

According to the report, HSBC invested $17.976 billion in companies involved in fossil fuel extraction in 2021.

Underwriting means to insure against a debt, in this context, to the financial risk of fossil fuel extraction projects.

But HSBC is not the only bank to underwrite such bonds, with others such as Barclays and Lloyds doing the same.

HSBC in Broad Street has been closed for refurbishment for around three months.

It is understood the bank has downsized, with space it used to occupy now available to another business.

Earlier this year, HSBC announced three steps it would be taking to get to net zero emissions by 2050.

HSBC has committed to publishing a Climate Transition Plan next year outlining its strategy to reach climate targets in 2030 and 2050; has committed to phasing down fossil fuel financing; and review and update its wider financing and investment policies.

On financing fossil fuel companies, a statement on HSBC’s website reads: “We’re committing to a science-aligned phase down of fossil fuel financing, in line with what is required to seek to limit the global temperature rise to 1.5°C.

“We’ll be engaging with clients to review their transition plans for compatibility with our net zero 2050 target, and will assess whether to continue providing financing for a client if no transition plans are produced.”

Additionally, Celine Herweijer, group chief sustainability officer, said: “HSBC understands that the sudden energy crisis that the world finds itself in will necessitate actions in the short-term around energy security.

“Our clients, like us, are operating in this new reality, but the longer-term imperative over the coming decades to transform business models for a net zero future remains unchanged.

“If anything, the current crisis should galvanise the need to supercharge investment into the clean energy transition.”

The Local Democracy Reporting Service has also requested a statement from HSBC on the Broad Street branch refurbishment and address points raised by Extinction Rebellion.