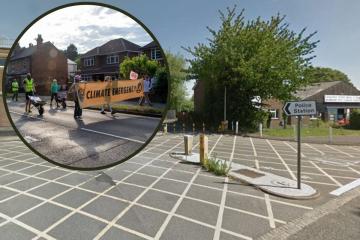 A PROTEST organised by Extinction Rebellion (XR) will be taking place in Newbury this coming weekend.

XR Newbury will be at Newbury Police Station at 9.30am on Saturday, September 26.

Outlining their reasons for protesting, a spokeswoman said: “We are challenging the government’s recent declaration that XR should be classified as an organised crime group” and added that Newbury MP Laura Farris joined a list of MPs in condemning XR.

READ MORE: Racial and religious hate crime on the rise in Reading

The organisation also claimed that the MP had not replied to a letter sent by them in June, asking for assurances about the government’s action on the climate crisis.

The spokeswoman added: “We are her constituents.

“She has an obligation and responsibility within our democracy to represent our concerns in Parliament – which she is not doing.

“The government’s first duty is to protect its people. It isn’t doing this.

“Due to this negligence, the science confirms that our children will have a very difficult future.

“The implications – as outlined in ‘Emergency on Planet Earth’ – are that they will face food and water shortages, social turmoil and breakdown, mass migration and extreme weather, impacting housing and any certainty of a stable future.

“It is also highly unlikely that they could be parents – themselves.

READ MORE: New ‘cheating map’ shows who is having an affair in Reading

“This is clearly a global, as well as a national problem, but the UK government’s negligence is unacceptable.”

Newbury MP Laura Farris told The Chronicle: “I am a passionate supporter of environmental issues – for that reason I am a Chair of the All Party Parliamentary Group on the Environment in Parliament.

“I do not condemn the objectives of XR – in fact I share them.

“However I do not support all of its methods which can be disruptive and counterproductive.

“I have corresponded with individual members of Newbury XR and continue to work with every other environmental organisation in my constituency on the critical issue of climate change.”