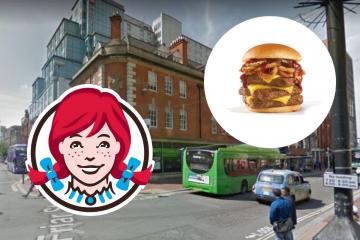 A fast food giant will open its first UK restaurant in Reading since leaving the country 20 years ago.

Plans were approved on May 25 to transform the former Nationwide store at 1 Station Road into a fast food restaurant.

The site is now set to become the first UK restaurant for American super chain Wendy’s since it left our shores in 2000, with an opening date of sometime in early 2021.

A spokesman for the fast food chain said: “As we’ve previously shared publicly, Wendy’s is coming to the UK.

“We plan on entering the market with company-owned and operated restaurants in early 2021.

“I can confirm that Reading will be our first site, and that the brand is very much looking forward to it and excited about the future as we enter this market.

“Reading is a great community and opportunity for a brand coming to the UK. It has the right mixture of foot traffic across dayparts, a strong employee base, and it’s a major transportation hub.”

The Chronicle previously reported on plans for the site, when it was unknown which restaurant would take up the space.

New plans have now been submitted, with small alterations which revealed American fast food chain Wendy’s plans to take on the unit at 1 Station Road.

Developers Thackeray Estate resubmitted the application, which seeks to increase the opening hours for the ground floor restaurant by 30 minutes and add a staff room in the basement.

The approved opening hours are for 7am-11pm (Sunday – Thursday) and 7am-12am (Friday and Saturday) but the agent for the application says this would put it at a disadvantage, with the Caffe Nero opposite opening at 6.30am.

It is therefore looking for opening hours starting at 6.30am.

Flats could go above

The empty offices on the floors above the planned Wendy’s restaurant are set to become flats, with new plans submitted by another developer for seven flats on the second and third floors.

However, previous plans have been approved by the council for flats at the site and not built.

RBC’s deputy leader councillor Tony Page has previously stated the council has lost £6 million and hundreds of affordable homes due to the government’s prior approval legislation which allows developers to transform offices into flats without seeking planning permission.

The government introduced the legislation in May 2013.