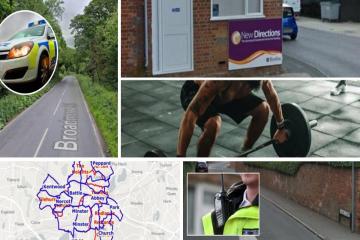 WE have rounded up some of this week’s most read stories, just in case you missed them.

1. Deliveroo driver dies in crash with car in Reading

A DELIVEROO driver has been killed after being involved in a crash with a car in Reading.

Police reports suggest the incident happened in Addington Road when the crash happened.

POLICE have given an update on the woman arrest after a cyclist was killed in a crash yesterday.

Thames Valley Police confirmed yesterday that a 42-year-old man had sadly died follow a crash between a cyclist and a car in Sonning.

You have six more weeks to have your say on changes to electoral ward boundaries in Reading.

All but one ward is set to be changed and two councillors could be added to the council’s membership.

A MAN has been charged with five counts of rape and assault by beating after three women were attacked over a two year period.

Thames Valley Police have launched an investigation after three women were attacked between October 2018 and June 2020 in Waltham St Lawrence.

5. Plans for gym submitted as part of new cinema proposal in Caversham

A former college could become a gym as part of cinema plans in Caversham.

Some readers raised concerns when they read plans from Hermes Property Unit Trust for a new cinema in Caversham to replace a beloved gym.