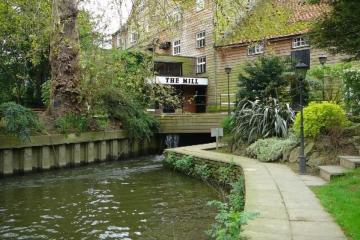 A BELOVED theatre will be reopening soon thanks to some help from actor George Clooney – and other well-known supporters.

The Mill at Sonning is to reopen its theatre on October 30 and will announce all its in-house theatre productions for 2021.

Announcing the good news on its Facebook page, the Mill revealed also that the auditorium is to be named in honour of legendary playwright Ray Cooney, who has also leant incredible support for the venue during lockdown.

After nine months of closure due to the pandemic, The Mill at Sonning – the UK’s only dinner theatre – is to reopen its stage later this month with a winter season of comedy, magic, cabarets and plays.

Since July, when the theatre celebrated its 38th birthday, The Mill has only been able to operate its adjoining restaurant with reduced seating, but this together with fundraising and donations from Mill Angel supporters and Hollywood star George Clooney and his wife Amal, who are near neighbours and regular attenders, have been a lifeline to ensure the venue’s survival.

Artistic Director Sally Hughes singles out special praise for the playwright Ray Cooney, whose legendary farces are performed regularly at the venue.

“I owe the most enormous thank you to a very special man – the wonderful Ray Cooney,” she said.

“When we had to close down he was straight in there with financial aid.

“He has called me every week during the last five months to see how we are getting on.

“Next year I will be producing a special gala night we are naming the auditorium after him.”

The 2021 season will include a new production of Ray Cooney’s riotous comedy farce, ‘Two into One’, directed by Ron Aldridge, from August 5 – October 9.

The season launches with Alan Aykbourn’s classic comedy ‘Relatively Speaking’, which will run from March 24 – May 22.

Directed by Robin Herford, a long time associate of the playwright, it will be a restaging of the production that was playing to packed houses in March when all theatres were closed by the Covid pandemic.

That will be followed by the return of TV and film legend Brian Blessed to direct the crime whodunit ‘Busman’s Honeymoon’ by Dorothy L. Sayers (May 27 – July 31), featuring her greatest detective creation, upper crust sleuth Lord Peter Wimsey.

Brian Blessed said: “Dorothy L Sayers is one of the greatest writers of The Golden Age of British crime fiction.

“This is her masterpiece!”

The 2021 season will conclude with a spectacular production of Irving Berlin’s musical ‘Top Hat’ (October 16 – December 31) based on RKO’s motion picture.

The Mill will reopen with a much reduced capacity of 70 customers for dinner and show due to social distancing, but the venue has come up with an ingenious way to hide the empty seats that have to be left between bookings.

“Our in-house master carpenter has built small tables that will slot over the empty seats.

“These can move depending on the size of each group and will be dressed with small lights, so the auditorium will look more like an intimate cabaret space than a traditional theatre,” said Sally.