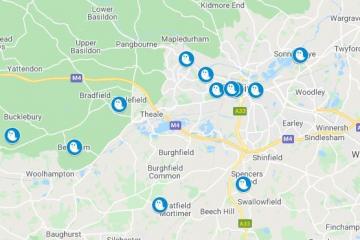 READING and West Berkshire are believed to be home to some of the most haunted places in the UK – this paranormal sightings map pin-points the most spooky hotspots in and around the town.

Simply click on the ghost icons to find out more about the spooky goings-on at each location.

Dozens of battles and sieges occurred in Berkshire during the English Civil War, and prior to this the county hosted the conflicts between the Danes and King Alfred in the ninth century.

One of Reading’s oldest buildings, Watlington House, dates back to the 1500s and is now used by local community groups.

It is said to be haunted by Captain Edward Purvis, who was the first recorded occupant of the house – back in 1794.

He fought at the Battle of Corunna in the Peninsular War with the 4th Regiment of Foot and trained the Berkshire Militia in Orts meadow near his home.

Apparently, dressed in his red uniform and smoking a pipe, Captain Edward looks out of the window of the building.