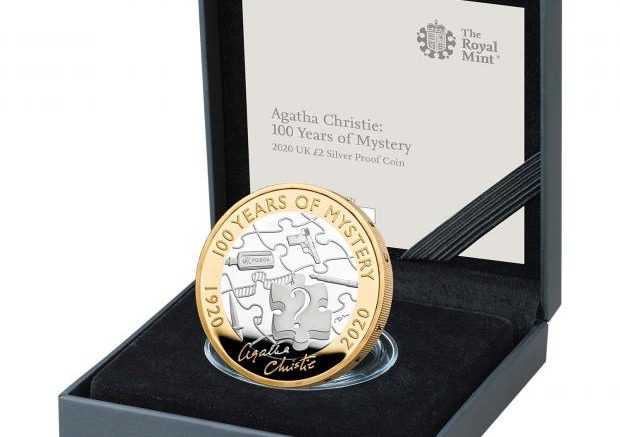 This year there has been a whole host of special and significant coins released by the Royal Mint.

From highly sought-after collectors items to celebratory coins in full-circulation, there were some cracking coins produced this year.

Whether you’re a fan of collecting rare coins or just enjoy spotting the odd ‘one-off’ in your purse, these coins are bound to put a smile on your face.

Here are all of the coins to have been released in 2020:

Commemorating the centennial of Dame Agatha Christie’s first published novel, The Mysterious Affair at Styles, The Royal Mint celebrated 100 years of mystery with this  special-edition £2 coin.

Adorned with all the hallmarks of her novels, this coin features everything you would expect from an Agatha Christie story – including her favoured method of poisoning – all served on a bed of jigsaw pieces.

Now, the series continues with a new coin exploring the technology that has characterised the films, from exploding pens to ejector seats.

Nearly 2,000 years ago Romans imagined a noble, graceful warrior and placed her on coins with the name Britannia, the new province they had claimed.

Britannia has been reimagined many times as she has appeared on the coins of every British monarch from Charles II through to Her Majesty The Queen.

This is the first time the British Red Cross has been commemorated on a UK coin, and it is available with a colour-printed reverse featuring the iconic Red Cross emblem.

A current motto of the Red Cross and Red Crescent Movement, ‘PER HUMANITATEM AD PACEM’, which translates to ‘THROUGH HUMANITY TO PEACE’, is included as an edge inscription.

This coin pays tribute to Captain Cook’s legacy of scientific discovery and exploration – only 5,000 coins have been made making it highly collectable.

The latest release from their series celebrating Winnie the Pooh features Christopher Robin on a coin struck by The Royal Mint for the first time.

The inspiration behind the storybooks and friend to the inhabitants of the Hundred Acre Wood appears on the coin, struck in 22 carat gold and finished to the finest Proof standard.

The third coin in the Music Legends collection celebrates rock’s definitive chameleon with a design inspired by an image of the singer from his time spent living and recording in Berlin.

The inclusion of the lightning bolt motif from the Aladdin Sane era captures Bowie’s career journey, and the moment he finally put aside the props to emerge as an artist in his own right.

For more than 1,100 years, the nation’s story has been told through coins struck by The Royal Mint, a narrative carried in the pockets and purses of all its people.

The Royal Mint said: “The contribution of ethnic minority communities has been such an important part of that story but has often gone unrecognised. This coin has been created to celebrate all the people who have made Britain what it is today.”

Having made more than
4,000 performances in over 80 countries and sold more than 300 million records worldwide, Elton John is without doubt a British music legend.

End of the Second World War

Commemorating the 75th Anniversary of the end of the Second World War.

Produced in collaboration with Imperial War Museums – it makes a fitting keepsake for any military history enthusiast.

This rare bank issue three shilling coin was only struck for two years.

It was minted during the Napoleonic Wars, when the Royal Mint was not producing Crown coinage and is highly unusual and collectable.

Around 50–60 different species of fossils have been found here, including Hylaeosaurus, the first armoured dinosaur ever discovered.

Featuring an original design by palaeo-artist Robert Nicholls it shows an anatomically accurate reconstruction of Hylaeosaurus. Likely a solitary animal, it lived during the Early Cretaceous period 140 to 133 million years ago.

The Dinosauria Collection continues with the latest coin in the series celebrating the achievements of Richard Owen, the scientist who defined dinosaurs and later founded the Natural History Museum to share the wonder of these awe-inspiring creatures.

Featuring a design by palaeo-artist Robert Nicholls who specialises in producing anatomically accurate reconstructions of natural history specimens, it shows Iguanodon, one of the three creatures that Owen linked to form his new taxonomic group.

Selling for £147,950 this is one of the largest coins ever struck by The Royal Mint.

It contains two kilos of 999.9 fine gold and is a truly rare collector piece with only seven coins available.

Lunar Year of the Ox

Established in 2014 with the release of the Year of the Horse coin, The Shēngxiào Collection celebrates the lunar calendar and honours the various animals of the Chinese zodiac.

Continuing this annual tradition into 2021, The Royal Mint is proud to commemorate the second symbol in the 12-year cycle as we celebrate the Lunar Year of the Ox.

In 2020 The Royal Mint commemorated the 400th anniversary of the Mayflower voyage with a vibrantly designed coin.

The image of the Mayflower cutting through waves  is said to give a sense of adventure. It is double the weight of the standard silver Proof £2 coin.

In 1824 William Buckland, an eccentric clergyman and palaeontologist, produced the first scientific description of what became known as a dinosaur based on fragments of jaw and bone found in Oxfordshire.

Featuring a design by palaeo-artist Robert Nicholls who specialises in producing anatomically accurate reconstructions of natural history specimens, this 50p coin was designed with the expert guidance of the Earth Sciences Department of the Natural History Museum.

The only Beatrix Potter coin to be released in 2020 is this coin which features an original Beatrix Potter illustration, with Peter Rabbit looking for lettuces and mischief.

Only 18,000 of those colour Piglet coins are available.

The coin features one of E.H. Shepard’s original illustrations in full colour with the nervous but loyal Piglet sits happily blowing at a dandelion.

Widely regarded as one of the greatest bands in history, Queen are celebrated with a design that features the iconic instruments played by each founding member: Brian May’s Red Special guitar, John Deacon’s Fender Precision bass™ Roger Taylor’s Ludwig™ bass drum and Freddie Mercury’s Bechstein™ grand piano with the opening notes of Bohemian Rhapsody pressed down.

There are only 1,920 of these limited edition coin.

The coin honours all those who made the ultimate sacrifice for their country and celebrates 100 years since the burial of the Unknown Warrior.

As part of the Innovation in Science coin collection this limited edition coin celebrates the legacy of one of Britain’s greatest scientists.

It was produced in collaboration with King’s College London where Franklin’s DNA research took place.

Presented in a modern acrylic block with the classic 007 gun barrel illustration the coin features a stylish tuxedo design created by Matt Dent and Christian Davies.

Built in 1078, the Tower of London is one of the oldest historical buildings in the United Kingdom. It’s storied history and fascinating versatility has
made it a must-see attraction for London tourists from all over the world.

The Tower of London even
served as the site of The Royal Mint from 1279 until 1810, providing UK coins to the people of Britain for more than 500 years.

With such close links between The Royal Mint and the Tower of London, it’s only fitting that this iconic British institution is celebrated through the medium of
commemorative coins.

The Snowman has returned for a second year.

For 2020, the characters from Raymond Briggs’ celebrated story are reunited in a warm embrace in a poignant design that captures the depth of their friendship.

The Sovereign was first introduced in 1489 when Henry VII demanded a ‘new money of gold’ to represent the power of his reign.

It was then issued by every monarch who
followed until early in James I’s reign, the coinage reforms of 1816 brought forth a new Sovereign, featuring Benedetto Pistrucci’s masterful St George and the
dragon design.

To mark the 200th anniversary of the end of George III’s reign, all of the coins in The Sovereign 2020 Collection feature a special mint mark in the form of the king’s royal cypher.

The White Greyhound of Richmond

The Queen’s Beasts Collection nears its conclusion with the penultimate release in this ten-coin series.

Chosen as one of the ten ancestral beasts that lined the entrance to Westminster Abbey at Her Majesty The Queen’s coronation, the White Greyhound of Richmond has been reimagined for modern times by acclaimed designer Jody Clark.

The White Horse of Hanover

With the death of the last of the Stuarts, Queen Anne, in 1714, the British throne passed to George of Hanover, who became known as George I.

He brought with him the heraldry of the region, including a White Horse on a red background, known in German as the ‘Sachsenross’ and in English as ‘the White Horse of Hanover.

On 8 May 1945, the Allies finally defeated Nazi Germany, bringing an end to the Second World War in Europe and sparking celebrations across the country.

Designed by Royal Mint designer Dominique Evans, this wonderful piece of history
captures the joy and energy of the original VE Day.

William Wordsworth is one of the most popular poets to have written in the English language. His ode to love and joy, ‘I Wandered Lonely as a Cloud’, commonly known as ‘Daffodils’, is amongst the nation’s favourites.

To commemorate the 250th anniversary of his birth and celebrate the life and work of one of Britain’s greatest literary figures, The Royal Mint struck a special £5 coin.

This limited 45,000 edition coin features an original E. H. Shepard’s original illustration of Winnie the Pooh and his honey in full colour.

READ MORE: School could buy green space from neighbouring school to save ‘lungs of Reading’

The coin features an inscription on the reverse which reads ‘Peace, prosperity and friendship with all nations’.

You can purchase the special release coins on The Royal Mint’s website.

Have you seen many of these coins? Let us know in the comments.