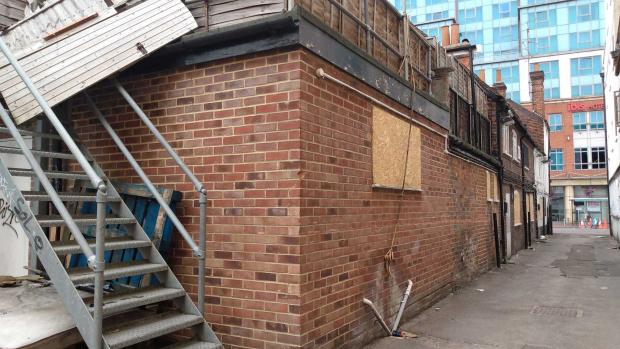 A Reading pub that dates back to the 1840s has been given a layer of protection and defined as a heritage asset.

The Bugle pub in Friar Street was first used as a pub in 1841, but it sadly closed in October 2021 due to lack of trade.

But that hasn’t stopped councillors seeking to protect it by adding the pub and linked properties to its rear to the local list.

Debate over the future of the building took place as its owners, Thackeray Estates, are seeking to transform buildings it owns into a 157 room apart-hotel, with The Bugle being retained and its interior used as a pub or restaurant.

David Owens, construction director at Thackeray, said the pub’s landlord was struggling to pay below market value rent due to a lack of trade.

Mr Owens asked for the front of the pub to be listed, but attached houses to the rear, known as Fife Court, to be left off.

But councillors felt that these houses played a part in Reading’s ‘working class heritage.’

Houses known as Fife Court, which are attached to The Bugle, have also been locally listed. Credit: James Aldridge, Local Democracy Reporting Service

The desire to retain The Bugle as part of the town’s pub heritage dominated the discussion.

Evelyn Williams, chair of the Reading Conservation Area Advisory Committee, called the preservation of the pub ‘a lucky survival’, adding other pubs, such as The Boars Head, have not been as fortunate.

The Boar’s Head was located in Friar Street but demolished in 2003.

READ MORE: Reading town centre pubs that have closed down in past decade

Cllr James Moore (Liberal Democrats, Tilehurst), speaking as a former chair of Reading and Mid Berkshire Campaign for Real Ale, said: “This is a very strong thing to my heart.

“Pubs have played an important role in the social fabric of Britain and indeed in Reading.

“Unfortunately, according to new research in the last 10 years alone pubs are down over 7000 in England and Wales in terms of closure, and The Bugle is one of those.

“The Bugle may never open as a pub, but because of the historical elements I feel like we need to maintain the heritage aspect of pubs especially in the historical context of Reading and their importance to the history and social fabric of Reading.”

Adding his support for listing, cllr Simon Robinson (Conservative, Emmer Green) said: “When I first moved here, it was my first local pub. I was in there literally every night for a couple of years. I was really sad when it shut. It’s important to protect it.”

Although developers are able to demolish locally listed buildings, their heritage importance becomes a factor when determining future planning applications.

The campaign to save Reading prison from redevelopment and turn it into an arts hub has received a second wind as activists are pushing for thousands more to sign a petition. Reading Chronicle | Town Centre …

A historic house in Reading that has connections to a local church could be up for an extensive renovation if plans are approved. Reading Chronicle | Town Centre …

A housing developer in Reading is moving ahead with its plans to build 974 homes across two developments in the town. Reading Chronicle | Town Centre …

A new restaurant is set to takeover a unit in a Reading mall that’s been vacant for six years. Reading Chronicle | Town Centre …

Ahead of Green Park Station opening up for passengers later this year, the Local Democracy Reporting Service has catalogued the remarkable development of train stations in Reading Chronicle | Town Centre …