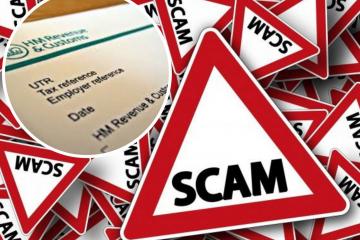 A scam alert has been issued over fake calls pretending to be from HMRC and Amazon.

It comes after a total of £250,000 was taken from three residents in Berkshire last week after they received bogus calls.

The Public Protection Partnerships fraud victim support officer is urging residents to be aware of the scam.

Two of the scammers told two victims from Newbury they were calling from HMRC and that they had thousands in unpaid taxes and fines owing to HMRC.

They were threatened with a fake lawsuit and potential prison sentence if they didn’t pay the outstanding money immediately.

The third victim from Wokingham was scammed out of nearly £200,000 from an Amazon scam.

The victim was called by a scammer and told that the National Crime Agency had identified fraudulent activity on their Amazon account.

They then went through a series of transactions with the fraudsters thinking they were helping the crime agency with their investigation.

Malcolm Philips, fraud victim support officer for the PPP, said: “People assume that it’s always the old and retired and perhaps more vulnerable people in our society that get scammed. But that’s not always the case.

ALSO READ; ‘Hero’ childminder from Bracknell will have her name on a GWR train

“In this instance one victim was a professional and still very much working and another victim was someone in their twenties. People lead such busy lives and if you’re called when you’re busy, and perhaps something they say also fits in with what’s happening in your life right now, you may believe the very convincing and charming stories of the fraudsters.”

The PPP would like to remind all residents that HMRC, the Police, your Bank, the Council, the National Crime Agency or any other official body will NEVER ask you to transfer funds following a call of this nature.

How can I avoid these types of scams?

If in doubt always ring off and independently (not from a number they give you) check with that organisation or talk to your bank.

Also, remember under no circumstances should you withdraw or transfer funds from your account following a cold call, email or text such as above, even if it sounds genuine.

You can always validate who you’re speaking to by ringing off and contacting your bank directly, or the organisation they claim to be calling from.

The fraudsters may directly tell you not to do this, they’ll say the ‘fraud’ they are investigating is an inside job and by alerting the organisation you’ll be undermining their investigation.

If you are told this then that’s an immediate alert that you’re being targeted by a fraudster.

Who do I contact if I’ve been a victim?

If you have been scammed in this way or have received a call such as this then please contact: The Citizens Advice Consumer Service Online via their online reporting form (All these reports are forwarded to Trading Standards). Telephone: 03454 04 05 06