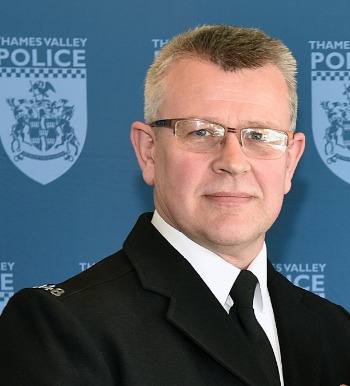 An officer with Thames Valley police’s Serious Collision Investigation Unit has been named in the Queen’s New Year’s honours list.

PC Phil Hanham has been given a Queen’s Police Medal in recognition of his service to the force, including his work as a family liaison officer.

PC Hanham has worked for Thames Valley Police since 1997.

He developed an investigative training package for his fellow roads policing officers, as well as providing support to hundreds of bereaved families who have lost a loved one following a road traffic collision.

His training course for Family Liaison officers has been delivered both locally and nationally for many years, comforting thousands of families.

He has also been instrumental in delivering the Safe Drive, Stay Alive course to schoolchildren in conjunction with other blue light services, aimed at improving road safety for young people.

Chief Constable John Campbell, said: “I am delighted to see PC Hanham recognised for his outstanding work for Thames Valley Police. Through his tireless work and dedication to his job, he has impacted so many people’s lives for the better.

“PC Hanham’s work as a family liaison officer has been significant, and as well as members of the public, he has also played a key role in supporting the families of Thames Valley Police officers who have tragically been killed on duty, including PC Andrew Harper, PC James Dixon, PC Daniel Clayton-Drabble and PC Kevin Flint.

“His family liaison work can be exceptionally challenging at what is a very difficult time for families, but he strives to ensure that they receive all the support they need.

PC Hanham said: “It is a huge honour to be awarded the Queen’s Police Medal today in the New Year’s honours list. I am most grateful for those who nominated me for this recognition and for all my colleagues who have supported me over the many years.”

“I am proud to accept the award today to recognise my achievements but mention must go to my family, and in particular my wife Caroline who have been the source of wonderful support during my career.”