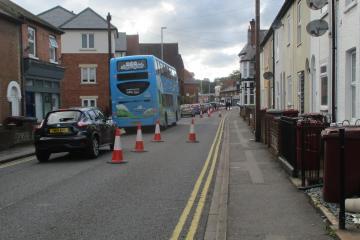 A “horror” one-way system aimed at helping residents to social distance will be scrapped just a week after it was introduced.

More than a thousand residents signed a petition opposing the scheme, which was “causing chaos” and “mind-boggling”.

READ MORE: These Reading museums will re-open next week

The council has now apologised and said it would remove the one-way restrictions by this weekend.

Councillor Tony Page, lead member for Strategic Environment, Planning and Transport at Reading Borough Council (RBC), said: “I would like to apologise to residents and local businesses in Caversham for the obvious disruption and inconvenience caused by the introduction of this temporary scheme.

“We are now moving swiftly to reverse it due to the widespread lack of support in the local area.

“The scheme was well intentioned to make travelling by bike or walking easier in response to the pandemic, which was important in the narrow pavements and streets of Caversham.

“We were also very aware the same constrained road layout in the area meant these changes were challenging.

“It has quickly become apparent there is a lack of local support for the scheme which is why we are moving quickly this week to revert to the previous road layout.”

Delays in the supply chain caused by large numbers of  councils attempting to source the same road infrastructure at the same time meant the scheme was delayed by six weeks.

RBC says this meant traffic levels were much higher than anticipated at the point of introduction which – combined with the constrained road network in Caversham –  has led to traffic bottlenecks.

The council said a minority of motorists had been observed flouting the one-way systems whilst driving dangerously.

Cllr Page added: “It is worth noting the government guidance issued to all councils under the Active Travel scheme was that changes could be implemented under temporary powers and without prior consultation.

“This was understandable in the circumstances, but it does emphasise again the importance of local consultation before any major changes are introduced.”

The removal of the scheme was backed by Caversham ward councillors this weekend after they met with residents.