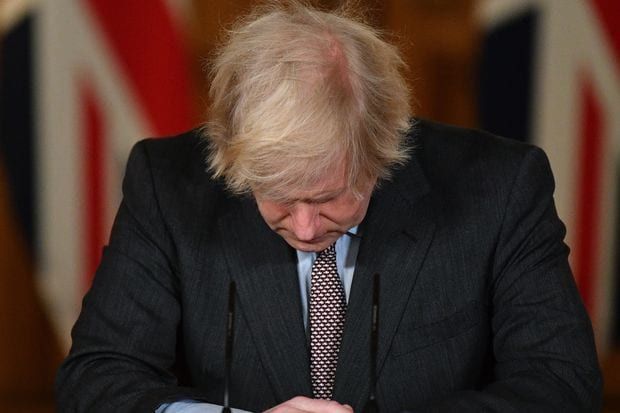 This week Boris Johnson announced that the UK Covid death toll had surpassed 100,000, stating it was “hard to compute the sorrow” the deaths had caused.

As of 16 January, the UK has one of the highest death rates in the world relative to its population – with more than 16 people in every million dying each day from coronavirus at the beginning of 2021.

READ MORE: The five most expensive streets in Berkshire

This has led many to ask why the UK has reached a death toll higher than that witnessed during the Great Plague, Aids pandemic, and every war and terrorist attack since 1945 combined.

Speaking at the Downing Street press conference on Monday, the Prime Minister said: “I think on this day I should just really repeat that I am deeply sorry for every life that has been lost and of course as I was Prime Minister, I take full responsibility for everything that the Government has done.

“What I can tell you is that we truly did everything we could, and continue to do everything that we can, to minimise loss of life and to minimise suffering in what has been a very, very difficult stage, and a very, very difficult crisis for our country, and we will continue to do that, just as every government that is affected by this crisis around the world is continuing to do the same.”

Here is what we know so far.

How does the UK death toll compare to other countries?

The UK is one of only five countries in the world and the only country in Europe which has surpassed 100,000 deaths.

The others are Brazil, the US, India and Mexico.

Around Europe, countries which once seemed in far greater danger of catastrophic fatalities now fall far below the UK in terms of fatalities, due to a number of factors.

Italy, where the south was locked down with only the Army patrolling the streets, has seen less than a third of the number of deaths the UK has witnessed (27,000).

In Germany, Covid deaths are now recorded at 53,000 in total.

In Finland and Iceland, where stricter lockdowns were imposed earlier, 600 and 50 deaths from Covid have been reported respectively.

Why is the UK Covid death toll so high?

There is not one specific reason why the UK is one of only a handful of countries to have surpassed 100,000 deaths.

Medical experts have stated that the UK’s ageing and ethnically diverse population, high obesity levels and the fact that London is a global travel hub for Europe are all factors in the country’s high Covid death toll.

However, the government has also been accused of a number of decision-making failures which have led to excess deaths.

Here are some of the factors that may have contributed to the UK’s high death toll.

The absence of a test and trace system last spring – when the virus was spreading at an unprecedented rate – is considered a key factor in the cause of excess deaths.

Test and Trace was not launched until 28 May 2020, four months after the first case was confirmed.

The unwillingness of the UK government to close its borders when the virus was first reported in the UK is also thought to have been a major contributor to the high death rate.

MPs have since compared the UK response against places such as South Korea, where screening and mandatory quarantining were in place for arrivals from China, by 3 January 2020. South Korea has witnessed 1,300 deaths since the pandemic began.

In New Zealand, arrivals from China were quarantined for 14 days from 3 February 2020 and all international arrivals were ordered to quarantine from 15 March. New Zealand has had 25 deaths since the beginning of the pandemic.

The first UK case of covid-19 was discovered in Yorkshire on 31 January 2020, the UK has still not closed its borders to International travel. However, all but essential travel and travel corridors have been permitted since June and a 10-day mandatory quarantine for International arrivals has been enforced.

On 25 January, it was announced that the UK will introduce mandatory quarantine in hotels for arrivals from high-risk countries.

Another factor that may have contributed to the high Covid death toll in the UK is that the first lockdown was not imposed until 23 March 2020 – seven weeks after the virus was first identified in the country.

On 31 January 2020, Italy suspended flights from China and by March 4, all schools were closed. Despite being one of the worst affected countries initially, it has now recorded 27,000 deaths – much lower than the UK toll.

Australia went into lockdown just 10 days before the UK, and has seen 909 covid-related deaths. The country imposed mandatory quarantine for all international arrivals in conjunction with its national lockdown.

Care homes are another area in which various failures and equipment shortages may have contributed to the high death toll. A third of all those who have died from Covid-19 in the country have been care home residents.

At the start of the pandemic, there were significant delays in providing adequate PPE to care homes, and many patients were allowed to return from hospitals before showing a negative coronavirus test.

Mass testing was not introduced into care homes until May 2020.

Eat Out to Help Out

A second rise in cases also became apparent last August and September, as schools and universities returned to classroom learning and the ‘Eat Out to Help Out’ scheme was rolled out.

What seemed to be a positive relaxation of lockdown, and a lifeline for struggling hospitality venues, is now considered one of many reasons why the death toll has exceeded initial expectations.

Has the government admitted fault?

Sir Patrick Vallance, the government’s chief scientific adviser initially stated that keeping deaths below 20,000 would be considered “a good outcome”.

The prime minister has described the rate of infection within the UK as “pretty formidably high” despite a national lockdown being imposed since 5 January.

He added that 100,000 was a “grim statistic”, as he took “full responsibility for everything this government has done.”

However, Johnson believes the government has done “everything it could” and continues “to do everything it can do” to suppress the virus and lower fatality rates.

Home Secretary Priti Patel has admitted the UK should have closed its borders much sooner, and has called for the new quarantine hotel sanctions to be imposed on all international travellers.

On 19 January, Patel was recorded telling an online Conservative meeting: “On ‘should have closed our borders earlier’, the answer is yes.”

Health Secretary Matt Hancock has described the death toll as “heartbreaking” but has warned on Sunday 24 January: “We don’t rule out further measures (of lockdown restrictions), but I’m not going to go into that.”

In an interview with Sky’s Sophie Ridge earlier on Sunday, he also admitted that the country was “long, long, long way” from easing lockdown.

He has recently suggested there could be a continuation of lockdown into the spring – potentially beyond Easter.

Boris Johnson has confirmed that his government has “learned lessons” from its previous actions to bring down the infection rate.

What have experts said?

Questions are now being asked as to whether the government really did do “ everything it could”, as Boris Johnson claims it did.

Labour leader Sir Keir Starmer has described the death rate as “a national tragedy”, adding that Johnson’s government was “behind the curve at every stage.”

The government has been criticised for its too-little-too-late strategy, as the opposition argues the alleviation of lockdowns in summer and in the weeks before Christmas were catastrophic to the rate of infection.

The SNP’s Joanna Cherry has also made calls for Priti Patel to resign because of the government’s failure to close the UK border in immediate response to rising cases last spring.

The case for earlier intervention has also been argued by Professor Neil Feguson, the epidemiologist who advised in favour of the initial lockdown.

The UK government has promised that an independent inquiry into the handling of the pandemic will be launched, though no date has been set.

Which groups have been affected the worst?

The Office for National Statistics (ONS) has reported that Black and South Asian ethnic groups have been hit hardest by the pandemic.

However, after considering social factors such as jobs, living conditions and how many people share a household, the significance of this trend drops considerably.

People of minority ethnic groups make up just over a quarter of dental practitioners, medical practitioners and opticians. They are also more likely to be nurses, medical radiographers, nursing auxiliaries and assistants and technicians.

Black and Asian men also make up one third of the population of taxi drivers and chauffeurs.

Black African and Bangladeshi men were more than three times as likely to die than white men.

Furthermore, men are more likely to die from coronavirus than women – potentially twice as frequently. This has been attributed to social and biological factors.

The group most likely to die from Covid is the over 85s. Almost 90 percent of deaths from Covid in the UK have been in the over 60s age bracket, however since the vaccine has been introduced the biggest decrease in weekly deaths has been observed in the over 80s age group – according to ONS.

England has recorded the highest death rates. The borough of Brent, in north west London, is the area worst affected by Covid-19 in the country, with the North West and North East recording the highest daily death rates.

Is the death toll expected to continue rising?

At the prime minister’s briefing on 26 January, Professor Chris Whitty stated that the infection rate was continuing on a downwards trend, though some areas were not flattening as convincingly as others.

The death rate is expected to continue to rise for some weeks, as those who contracted the virus prior to the 5 January lockdown are only likely to be either recovering or falling fatally ill now.

Matt Hancock also stated that there could be a “tougher period ahead,” alluding to further deaths in the coming weeks.

He added: “The vaccine offers the way out, but we cannot let up now,”

Over 85 percent of over 85s have now been vaccinated in England, with all over 70s expected to have received their first dose by mid-February.

Nearly seven million people have now been vaccinated in the UK. There have been 3.7 million Covid cases confirmed since the pandemic began.