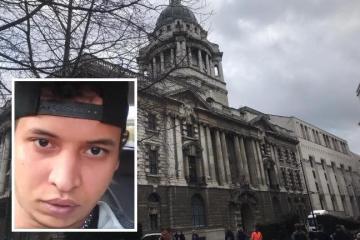 A MAN accused of carrying out a suspected terror attack at Reading’s Forbury Gardens in which three friends were killed is set to face a trial in November.

Khairi Saadallah, 25, appeared at the Old Bailey today via video-link from Belmarsh Prison in south-east London.

He wore a maroon sweatshirt and grey trousers for his court appearance, speaking only to confirm his name.

Saadallah, of Basingstoke Road in Reading, is accused of launching the two-minute stabbing spree in Forbury Gardens, Reading, shortly before 7pm on Saturday, June 20.

James Furlong, 36, David Wails, 49, and Joseph Ritchie-Bennett, 39, all died, while three others – their friend Stephen Young, and Patrick Edwards and Nishit Nisudan, who were sitting in a nearby group – were injured.

Mr Justice Sweeney said he was prepared to set a provisional date of November 30 for a trial, which may last between two to three weeks.

Saadallah will appear again at the Old Bailey for a preparatory hearing on November 6.