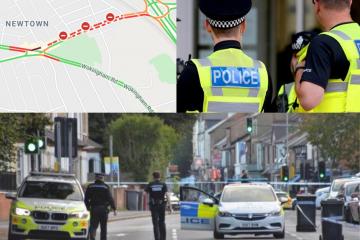 TWO men have been arrested as police launch a murder probe in Reading.

This comes after a man was stabbed on London Road, Reading, at around 6pm yesterday (Aug 4).

Police believe it was a targeted attack.

An 18 year old and a 21 year old, both men from Reading, have been arrested on suspicion of attempted murder, and currently remain in police custody.

The victim, a man in his thirties, was taken to hospital where he remains in a serious but stable condition.

Since the attack, police have been appealing for witnesses of the incident to come forward with any information they have.

The force has also appealed to drivers who may have dashcam footage from driving near London Road around 6pm.

Senior investigating officer Detective Chief Inspector Dave Turton, said: “We are carrying out a thorough investigation following this incident which at this stage appears to be targeted.

“Two men have been arrested and they remain in custody at this time.

“We are asking anyone who may have witnessed the assault to please come forward.

“Additionally we are asking anyone who may have been driving along London Road at around 6pm, to please check your dash cam footage and get in touch if you believe it may assist our investigation.”

Road closures on and surrounding London Road still remain in place at this time.

DCI Turton added: “Members of the public will see an increased police presence whilst we investigate and we would encourage anyone with any concerns or information to speak to one our officers.

“A number of road closures remain in place at this time. We would like to thank the public for their patience whilst we continue our investigation.”