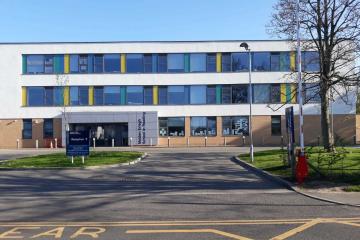 A school in east Reading has backed plans which could see the town get its first ever School Street.

Hundreds of residents are calling for road closures at Crescent Road, where there are three schools: Maiden Erlegh School, Alfred Sutton Primary School and UTC Reading.

A petition asking for the road to be closed to cars at certain times during the day to allow children to walk and cycle to and from school has received almost 300 signatures.

Reading Borough Council (RBC) said the plans must be spearheaded by the three schools and the Maiden Erlegh Trust has now backed the proposal.

A spokesman for the trust said: “We would be delighted to support such a scheme along Crescent Road, which is routinely used by thousands of pupils each day to travel to and from the schools in the local area, including Maiden Erlegh School in Reading.

“The benefits of such a scheme are clear and we therefore look forward to engaging with our colleagues in neighbouring schools, as well as our parents, pupils and residents in order to successfully bring such a scheme forward to the council.”

As well as being home to three schools with capacity for over two thousand pupils, a fourth school will soon join the trio at the neighbouring street Hamilton Road and is also run by Maiden Erlegh.

Presenting the School Streets petition at a council meeting on July 20, Catherine Wipple said Crescent Road is a “perfect candidate to become a School Street”.

She said: “We want our children to breathe clean air and walk on safe streets.

“Crescent Road is a busy and at times dangerously crowded road, with three schools, narrow pavements and fast traffic. There have been several accidents in recent years.

“We therefore wish the council to support our road closure scheme at drop off and pick up times by September 2020.”

Councillor Tony Page, lead member for Environment, Planning and Transport at RBC, said School Streets should be led by schools, with support from the council subject to a number of conditions being met.

Implementation – even on a trial basis – will be subject to local support and there will be conditions about the types of street that could be eligible.

The council is working on a guide to assist schools in coming up with a School Streets plan.

But he said problems that were typically experienced around schools prior to Covid-19 do not currently exist and, while schools are expected to fully open in September, schools’ priorities may have changed.

UTC and Alfred Sutton were approached for comment but had not responded at the time of publishing.