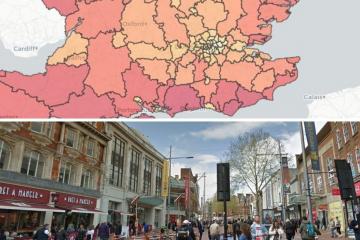 BERKSHIRE would not be a ‘high risk’ area for Covid-19 infections if a second wave was to happen, according to data from Oxford University.

Potential hotspot areas have been identified using a new online tool, which maps places most at risk across the UK, combining data about vulnerable groups, population and hospital resources.

According to the map, Berkshire would be one of the least at risk counties in the UK if a second wave took place.

The data predicts that 7.1 people out of every 1,000 in the county would need general hospital care, while 2.2 people per 1,000 would need acute care.

In terms of hospital bed capacity in Berkshire, the interactive map shows that there are 568 for general care and 15 for acute care.

Given the constantly evolving situation, the map also allows users to adjust for changing infection rates and hospital resource levels.

In Berkshire West CCG, which covers Reading, West Berkshire and Wokingham,  there is a population of 489,709 people – and 7.3 out of every 1,000 people could potentially need general hospital treatment, with 2.3 needing acute care.

With the Royal Berkshire Hospital in Reading, this area also has most of the hospital beds – with a 522 capacity for general care and 15 for acute care.

Berkshire East, which covers Bracknell, Ascot, Windsor, Maidenhead and Slough, is predicted to pose an even lower risk.

According to the data, this area has a hospital bed capacity of 46, with 0 beds available for acute care.

Additional risks beyond age-composition of the area is included, such as social deprivation, race/ethnic composition and population density offers a further nuanced identification of areas with disproportionate health care demands.