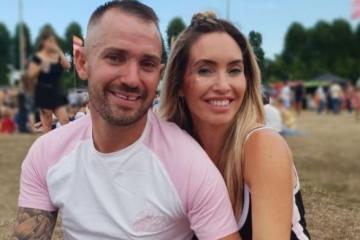 MORE THAN £4,000 has been raised in less than 24 hours for Binfield FC midfielder Tom Melledew, who faces a tough journey of recovery after falling 20 feet through a roof.

Lifelong friend and Thatcham Town defender Gareth Thomas set up a crowdfunding page yesterday to ease the financial burden Tom will face on top of the mental and physical struggles as he recovers.

Tom, 34, who lives in Tilehurst, was left with fractures to his pelvis, a chipped bone in his back, two broken ribs which punctured his lung and several other injuries to his body after falling through a roof he had been doing work on with Gareth on Tuesday (June 23).

Speaking to The Chronicle, Gareth said: “I was right next to him as it happened. The roof just collapsed.

“It was horrible. I decided to set up the fundraiser because I wanted to do something.

“We’ve known each other since we were six years old, went to school together – I’m godfather to his daughter and he’s godfather to my son.”

Until last year, Tom was captain for Thatcham Town FC before moving to Binfield FC.

Since Tuesday, he has had an operation on his elbow and hand, and the rest of his injuries do not require surgery but will involve a lengthy recovery process.

Gareth said: “He is going to need a lot of rehabilitation, a lot of positivity and a lot of love.

“The fact that £4,450 has been raised already is amazing, and shows how respected he is in the football community and as a friend.

“The way the fundraiser has ballooned is unreal.

“If we can help out financially that’s one less burden off his and his family’s mind.”

Due to lockdown, Tom can’t have many visitors to the hospital.

“We will set up video calls to see him as we can’t visit properly at the moment,” Gareth added.

“I have told people to keep talking to him and keep him mentally strong.”

Speaking about Tom’s injuries, Gareth said: “It could have been the worst of the worst.

“Something in his head told him to twist as he fell and if he hadn’t he would have landed on his back and his head.”

Gareth described his friendship with Tom, saying: “His dad brought me into football, and his mum is like a second mum to me.

“We’ve been friends for such a long time.”

The fundraiser aims to help with any burdens Tom will now face.

The page reads: “If we could help financially as well as mentally and physically then why not.

“He will be out of work and football for a while, so every little will help with the family and life in general.

“Please help him out.”