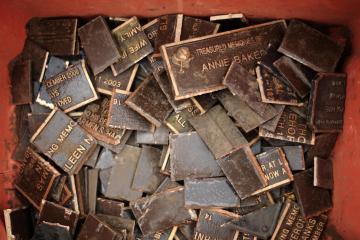 The Local Government Association (LGA) has called for councils to be given more powers to tackle rogue traders who deal in the spoils of metal heists.

Of those, 1,338 were infrastructure-related, which includes the stripping of metal such as roofing lead from buildings, taking electricity or railway cables, or stealing vehicle parts.

The rest were non-infrastructure related, which could involve stealing scrap metal or war memorial plaques.

This was down slightly on the previous year, although Greater Manchester Police did not submit figures, which could account for the drop.

The LGA said a decline in the years prior to this was partly due to the introduction of the Scrap Metal Dealers Act in 2013, which was brought in to crack down on the trade in stolen metal.

But the group said it has seen a recent resurgence in thefts, which it puts down to a range of factors including an increase in metal prices.

A spokesman added: “Councils are targeting their resources as efficiently as possible and do what they can to support businesses to meet the requirements of the legislation and can take enforcement action where issues are identified.

“Councils have limited powers and no funding to tackle unlicensed operators and the LGA has also called on government to introduce greater enforcement powers to help local authorities tackle rogue operators.”

At least 8,300 metal thefts across England and Wales last year were from buildings and other infrastructure.

Mark Harrison, head of heritage crime strategy for Historic England, said theft from historic sites like churches has far-reaching consequences over and above the financial cost of what has been stolen.

He said: “When thieves steal metal from heritage assets, such as churches, artefacts from the ground or shipwrecks, they are stealing from all of us and damaging something which is often irreplaceable.”

David Smith, chief executive of the Energy Networks Association, which represents gas and electricity network businesses, said: “Incidents are increasing across the country and can result in power cuts, causing disruption to homes and businesses.

“Those involved in metal theft are putting themselves and others at risk of serious injury or death and police forces are increasingly prioritising their work deterring metal theft.”

A Home Office spokeswoman said the Scrap Metal Dealers Act is a “powerful tool” for the police and local authorities, and that metal theft has declined overall since it was introduced.

She added: “The Act grants powers to enter and inspect scrap metal dealers’ premises and close unlicensed businesses, and makes it an offence for any dealer to buy scrap metal for cash.

“We continue to work closely with the police, Local Government Association, and the scrap metal industry to reduce metal theft.”