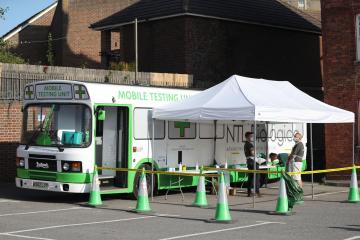 A new Covid-19 mobile testing facility will be set up in Reading from this week.

On Thursday (October 1) and Friday (October 2) this week, there will be a mobile testing van at the Prospect Park car park, for pre-booked tests only.

The Mobile Testing Unit will also be at the Liebenrood Road-based car park on October 8, 19, 29 and 30.

He also confirmed plans for a test site at the University of Reading campus are moving forward.

Commenting on the testing situation, he said: “I am sure you share Reading Labour councillors dismay and anger at the shambolic state of the government’s privatised test and trace system.

“Despite having had months to prepare, there is a major lack of capacity of labs to process tests leading to the difficulties residents are finding.

“The farce reached a low point when Lady Dido Harding, the government appointed Tory Peer boss of Test and Trace said the surge in demand as children returned to school was “unexpected”.

“This is what happens when experts are excluded, and we suffer government by cronies. Not only cronies but incompetent cronies.”

The health lead member said insufficient capacity in the testing system has led to national decisions to prioritise areas of the country with outbreaks or in local lockdown over areas like Berkshire.

READ MORE: New Covid rules: How does the rule of six affect students?

The rate of testing in Reading has not changed over the last month, according to Cllr Hoskin, but “demand has, predictably, increased”.

Residents who have symptoms will need to book a test appointment (via the online testing portal, the NHS COVID-19 app or by calling 119) to visit the mobile testing van in Prospect Park.

Those turning up without an appointment will not be tested.

Cllr Hoskin said details about that testing site at the university would be provided “in the near future, once the final sign-off process has occurred”.

He was responding to Cllr White, who had raised concerns after residents told him they have found it impossible to get a test for Covid-19 recently and asked what the council is doing to get more tests for people in Reading.