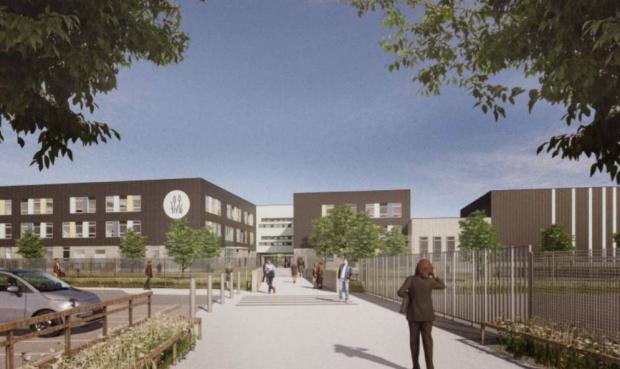 Two major plans that will have a long impact on the future of Reading have been submitted recently.

Over the Thames in Caversham, a plan has been submitted for the massive redevelopment of Caversham Park.

These are just two plans that have been submitted over the holidays.

You can view plans by putting the reference numbers in brackets into the council’s planning website here: http://planning.reading.gov.uk/fastweb_PL/welcome.asp

Development company Bowmer + Kirkland have submitted a plan to build a new secondary school in Reading.

The new school would be called the River Academy and would cater for pupils aged 11-16, a Special Educational Needs (SEND) unit and a sixth form for 300 students.

Notably, it would be located near the Rivermead Leisure Centre and the Reading Festival.

It would involve the demolition of buildings that are currently used as a golf driving range and other activities to make way for the school.

Bowmer + Kirkland have been contracted to build the school by the Department of Education.

A CGI of pupils spending break by the River Thames at the ‘River Academy’ secondary school in Richfield Avenue. Credit: River Academy

Once built, it would be run by the Maiden Erleigh School Trust.

Back in 2018, there was the prospect of land at Richfield Avenue and Cow Lane being used as a permanent Traveller site.

However, this plan was scrapped in favour of having this new secondary school being built instead.

The first big part of the plan is convert the Caversham Park main building, which used to be used by the BBC, into a 63 bed care home.

The building is Grade II listed, meaning the developers have to provide a Heritage Statement assessing the impact the changes will have on the building.

Additionally, a new 64 bed care home would be built on the  park as well.

So, of the 213 new homes being provided, 127 will be reserved for elderly care.

The remaining 86 will be regular homes.

Of these, 41 new houses and 12 apartments would be built on land to the east of the main house, and a further 33 houses would be built outside Historic Park and Garden boundary, but still within the site itself.

So far, the developers have submitted a ‘screening request’ to Reading Borough Council to gauge whether the plan would be acceptable before more documents are submitted.

Caffè Nero, which used to be located at the junction of Queen Victoria Street and Friar Street, closed down in the last year.

Now, Black Sheep Coffee Shops want to take over the spot and has applied for advertising consent for its designs.

The shop would have 20 seats indoors and 16 seats outdoors.

The company currently has locations across the UK, as well as in Paris, France and the Philippines.