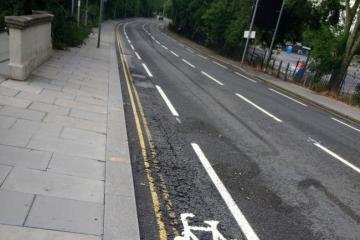 A new schedule for temporary cycling and walking schemes to respond to the Covid-19 pandemic has been revealed.

Reading councillors discussed the latest situation at a Traffic Management committee meeting on Thursday, July 2, after it was announced the council had received 75 per cent of its expected funding allocation.

Reading Borough Council (RBC) has received £221,250 from the Department for Transport (DfT) in the first round of Covid-19 emergency active travel funding, after bidding for £300,000.

In this first phase, there are seven planned schemes in Reading, which need to be completed by the end of August.

The council has also outlined a schedule and expected costs for second phase of projects.

These seven temporary schemes, some of which could eventually become permanent, will cost an estimated £260,000, leaving the council more than £40,000 short.

The council says it has the money in its capital budget to pay for this shortfall.

But Councillor Tony Page, lead member for Strategic Environment, Planning and Transport, said: “The council fully intends to bid again in Tranche 2 and is hopeful of recouping the difference once we have a clearer picture of the criteria being used by the DfT.”

He said there was not enough clarity from the DfT on what they were looking for from schemes and the council had asked DfT for information on why they only received 75 per cent.

Which schemes will be complete first?

The council has already completed one scheme – removing one lane of motor traffic and adding two cycling lanes on Reading Bridge – on June 12.

However, Reading Bridge has since been unexpectedly closed to motor vehicles by gas company SGN – on Monday (June 29) – for up to six weeks to replace two gas mains, which means cyclists currently have the full width of the road.

Councillor Jane Stanford-Beale said she is concerned about the narrow cycle lanes on Reading Bridge, parts of which include ground that is uneven.

READ MORE: ‘It’s been quite a journey’ – Interview with local catering company on lockdown

Cllr Page said the council would review the surface on the bridge while the “unexpected” SGN works are taking place.

He said the cycle lanes are advisory, as good as is currently possible, safe to use and have been “widely welcomed”.

Potentially next to be complete, Gosbrook Road/Westfield Road and Sidmouth Street have been fully designed but the council is awaiting materials such as temporary barriers and bollards, with a high demand from councils across the country.

However, councillor Adele Barnett-Ward asked officers to delay implementing the Gosbrook Road/Westfield Road scheme until after the Reading Bridge works are finished, which officers said they would look into.

An uphill (southbound) cycle lane on Redlands Road is another scheme planned to be complete this month and also includes cyclist priority measures at Christchurch Green junction.

The second phase includes a mix of medium and long-term schemes, which are expected to cost around £2 million, most of which will be permanent.