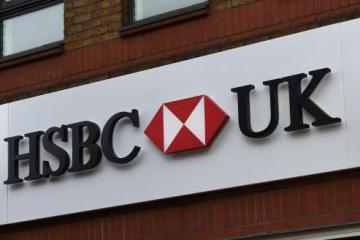 A HIGH-FLYING banker who claimed she was forced out of HSBC after having an affair with a married colleague is ‘unreliable and self-serving’ an employment tribunal ruled as they dismissed her case.

Madeleine Luckham, 38, head of delivery for staff digitisation, said her life became hell when she called time on the fling with 48-year-old dad-of-four Robert Clegg.

She accused him of setting out on a “mission to destroy” her career and referred to him as ‘Weinstein’ after the jailed movie mogul who preyed on actresses.

She also claimed that Mr Clegg, from Newbury, had sex in the work toilet with another employee shortly after their split, then winked at her after emerging ‘sweaty’ from the loo.

But an employment tribunal accepted his explanation that he was helping the woman clear up after being sick on hearing some distressing news and that the layout of the office meant that Ms Luckham could not have had the view she claimed.

ALSO READ: Could my area be affected by a potential second wave of Covid-19?

But other workers and contractors complained about her.

In one email sent by a superior Lloyd Robson he said: “The aggressiveness and mannerism of which some of these conversations were held and in front of others won’t be tolerated, and not expected by anyone at HSBC or in line with our values.”

Throwing out her claims of sex discrimination, harassment and victimisation, Employment Judge Catrin Lewis said: “We do not find he (Mr Clegg) abused his power or control over the claimant or acted in the way she described.

“We find he treated her more favourably than he would have done others in the same circumstances.”

ALSO READ: What John Lewis bosses had to say about its shops in Berkshire

And of the allegation that she was forced out, they ruled: “The reason why the Claimant’s contract was not renewed was because of the concerns raised by HR in very strong terms as a result of a number of complaints about her conduct towards colleagues and others she worked with.

events is unreliable and self-serving.

“In a large number of instances the allegations were based purely on the interpretation placed by the claimant on events or action, which was not supported by any cogent evidence. ”

Ms Luckham had claimed Mr Clegg flirted with other women in front of her after their split, got ‘very handsy’ at work with another woman and whispered in the woman’s ear ‘we’d have great sex’, the tribunal was told.

She had also claimed: “He would leer at my chest, my lips, touch me uninvited in public.”

ALSO READ: Reading brewery re-opening this week – and has applied for licence to open longer

Mr Clegg, the department’s global head, had begun a relationship with Ms Luckham in October 2017 after a drinks party.

They went to the bar in the hotel he was staying at across the road where they kissed, the London hearing was told.

Three days later he invited her to dinner. Mr Clegg said they had sex for the first time that night – and the sessions continued intermittently for “around three months.”

Employment Judge Lewis said: “He was married at the time but his marriage had broken down and he described himself as lonely and unhappy.”

Ms Luckham said she decided to end it at Christmas on account of Mr Clegg’s family life.

She also described the relationship as being “back on one minute and over the next”.

They were in bed together the following month – during a work trip to Hong Kong.

Ms Luckham had followed him to his hotel – angry and upset. They ended up having a long conversation and agreed it was not going to work.

Mr Clegg told her his wife had agreed to go to marriage counselling. The conversation was painful for both, he said.

The judge said: “However they had sex that night one last time – which he described as ‘goodbye sex’.”

But Ms Luckham said it was not over until the following April. The date is significant as she said his attitude towards her changed dramatically, said the judge.

The tribunal found text messages sent on January 24 and 27, 2018, between her and a friend including advice such as ‘you’ll only be hurting if you go there again’, were consistent to it already being finished.

The judge said: “The claimant’s friend is apparently encouraging her not to let her feelings get the better of her and not to sleep with him again.

“We are satisfied the relationship ended in December 2017 and was over by January 2018.

“We accept Mr Clegg’s account as to what happened in January on the Hong Kong trip, that the relationship was over and did not continue afterwards.

“We find this is also consistent with there being no further personal WhatsApp messages between the two of them between 31 January and 9 April, the texts that there are were work-related.”

When Ms Luckham sent Mr Clegg a picture by WhatsApp of Harvey Weinstein he believed it was meant as a joke – but said he did not find it funny.

The judge said: “He was absolutely mortified and extremely upset, and he also felt there was an implied threat she might make allegations about him. ”

Mr Clegg told the tribunal: “I was petrified of what she might do day-to-day and in the long term. I felt she would fabricate what had or had not happened.

“I made a huge mistake and I was deeply sorry about it.

ALSO READ: Here’s how you could get a £500 voucher to help save the high street

“I should not have got into a relationship at work and that is something that I have learned and I did not want to hurt her anymore than she had been hurt already.”

She said: “Kai and I discussed Rob, the way he looked at women like they were prey and the fact he had even earned himself a nickname, ‘Weinstein’.”

She added: “There is a culture of sexism at HSBC in which women are objectified by male colleagues, ignored when complaints are raised and frozen out of the business when they are perceived as ‘difficult’.”

Ms Luckham, from Teddington in south west London, sued Mr Clegg and HSBC for sex discrimination after she was let go and a £130,000-a-year job said she was promised never materialised.

But the judge said: “We find the claimant had come to feel more for Mr Clegg than she had anticipated when she entered into the relationship and she was struggling with her feelings for him, and about their relationship and its break up, throughout the period from January 2018 onwards.”

Mr Clegg was found to be in breach of HSBC’s policy during his disciplinary investigation and fired for gross misconduct in January 2019.

He admitted at the hearing that he had failed to declare both his relationship with Ms Luckham and subsequently another worker at the bank.

A ‘prolific’ drug dealer has been jailed after using the postal service to send drugs across the UK. Reading Chronicle…

A new bowling alley, mini-golf and darts venue is set to open at Broad Street Mall next year. Reading Chronicle…