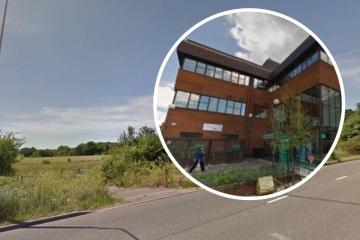 COUNCILLORS of two West Berkshire town councils have agreed to unanimously oppose plans to develop up to 1,000 homes at Sandleford.

Newbury Town and Greenham Parish councils recently considered the recommendations of their Joint Working Group (JWG) which was set up two years ago to secure, as far as possible, a coordinated response to all development proposals there.

The Sandleford JWG had met four times in the previous two weeks to prepare an initial response to Bloor Homes’ resubmitted plans for the main part of the Sandleford Park ‘core strategy’ site in the West Berkshire District Local Plan.

Speaking after the meetings, councillor Roger Hunneman, chairman of the JWG said, “I’m very pleased that our proposals were unanimously accepted by both councils, because that indicates that both councils support us – across all four parties represented.

“He represents – and lives on – the other side of town.

“The impact of over 1,000 more homes at Sandleford upon traffic congestion in Newbury would spread much further than Monks Lane, where I live.”

He emphasised that the whole planning policy situation had moved on since Sandleford was allocated as a strategic site in 2012.

He said: “We really must pause and take on board the impact of the Climate Emergency and Covid-19 on living, travel and work habits.

“It is totally unacceptable to now allow this development to go ahead.”

At Greenham Parish Council on Wednesday, it was councillor Gary Puffett who chaired the meeting where cllr Adrian Abbs presented the JWG recommendations.

Cllr Puffett said: “It has always been the view of Greenham Council that Sandleford was too much for our parish, particularly coming as it does after 1,500 homes on the Racecourse and many other developments off of Pyle Hill and Pinchington Lane in recent years.”

Cllr Gary Norman, who chairs the Newbury Planning and Highways Committee, said: “This is just the first of many responses to planning applications and highway schemes relating to Sandleford. The JWG did really good work helping us get our heads round what Bloor are proposing.

“I was particularly pleased with the work that cllr Chris Foster did for them on ecology and the need for a wider ‘buffer’ around the ancient woodlands on the site.”