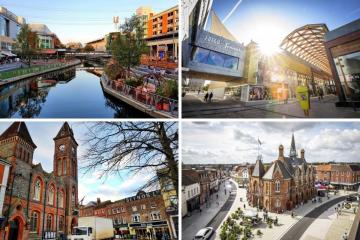 NEW data has revealed the how long the average person is expected to live throughout different areas of Berkshire.

The most recent figures (from the years 2017 – 2019) were released by the Office for National Statistics (ONS) last week.

The average life expectancy rates across Reading, West Berkshire, Bracknell and Wokingham don’t show a strong difference, but Wokingham has a slightly higher figure for both males and females than surrounding areas.

All were on or above the national average of 79.4 years for males and 83.1 years for females.

Wokingham’s average life expectancy from birth for women is 85.8 years, while for men the age is dropped slightly to 82.3 years.

Reading sees a slight drop into the 70s for males, with an expected age of 79.4 for men.

For women in Reading, the average expectancy from birth is 83 years.

The largest local area increase in life expectancy between 2009 to 2011 and 2017 to 2019 for males at birth was in Westminster, while for females it was in Scotland’s council area of Na h-Eileanan Siar.

Edward Morgan, Centre for Ageing and Demography, ONS, said: “The improvements in life expectancy at birth for males and females in the UK between 2016 to 2018 and 2017 to 2019, although lower than historical improvements prior to 2011, were the highest annual improvements for five years.

“The gap in annual improvements in life expectancy at birth between males and females has been narrowing since 2013 to 2015.

“In 2017 to 2019, female life expectancy improvements were seen to slightly exceed those for males for the first time since the start of the published data series in 1981 to 1983.

“However, it is too early to say whether this is a trend that will continue into the future.

“The impact of COVID-19 on period life expectancy will be shown in the National life table for 2018 to 2020 which will be published in Autumn 2021.

“The National life tables 2017 to 2019 were produced using data up to the end of December 2019, and therefore precede the COVID-19 pandemic.”