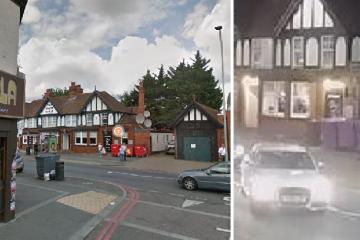 A MAN has been ploughed down by a car that was driven at him after an argument near Oxford Road.

It was about 8.55pm and the 43-year-old victim stopped when he saw the car and was concerned about the driver.

He asked if he was ok but the driver shouted and swore at him in response.

Police said the car was then driven into the victim, who was attempting to cross the road, and hit him onto the opposite side of the road.

The car then drove off continuing down Belmont Road.

Officers said the victim had cuts and scrapes to his legs, arms and wrists, as well as bruising over his legs. He did not need to go to hospital for treatment.

Police have today released a picture of a car they would like to trace in connection with the hit and run.

The offender is described by the force as white, aged approximately in his mid twenties, with short shaved hair, a well-groomed beard and was wearing a grey t-shirt.

Investigating officer PC Samuel Rice, based at Reading police station, said: “I would like to speak to anyone who recognises the Audi shown or who witnessed this incident as the driver may have information which could assist us.

ALSO READ: In the Dock: More results from court

“Thankfully the victim suffered only minor injuries but the outcome could have been far more serious.

“If you have any details which could help us in our ongoing investigation please get in touch.”