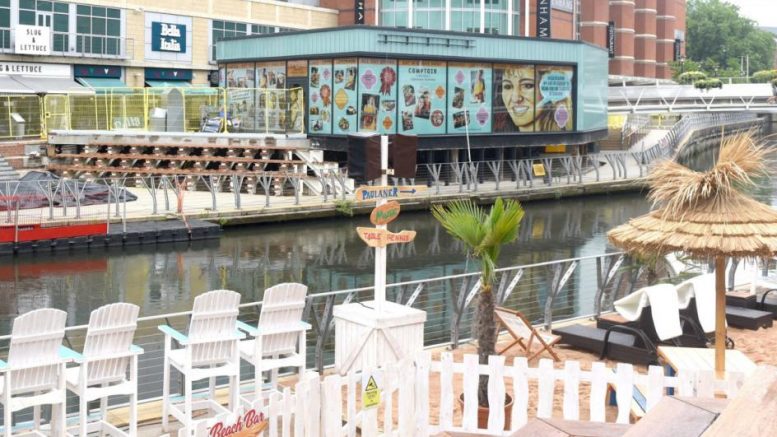 Drinks and merriment at The Oracle Riverside in Reading could go until later than usual in the future.

That’s because the company that runs the pop-up bar on the south bank of the Kennet at The Oracle has applied for a new licence.

The pop-up bar has become a popular place for people to enjoy drinks after work, or as a place for shoppers to have a pit stop.

The bar’s themed decorations change with the seasons.

Over the summer, the bar was the Mojito Beach Bar Club, which hosted live cover bands playing pop classics.

Last Winter, it became The Jagerhaus, which featured heated private snow domes with the bar serving a range of winter drinks including mulled wine, hot chocolate and cocktails.

The place the bar occupies has currently been cleared, but a new look bar is thought to be coming soon.

In preparation for the colder months ahead, the bar’s owners Touch Entertainment Ltd has applied to keep the party going until 11.30pm.

READ MORE: Restaurants that could close at The Oracle to make way for 475 flat transformation

As for alcoholic drinks, the company has applied to sell alcohol on site from 11am to 10.30pm Monday to Thursday, 11am to 11pm on Fridays and Saturdays, and 11am to 10pm on Sundays.

The licensing application has been submitted to Reading Borough Council.

Anyone who wishes to comment on it can do so by emailing licensing@reading.gov.uk .

The deadline for comments is Wednesday, October 19.