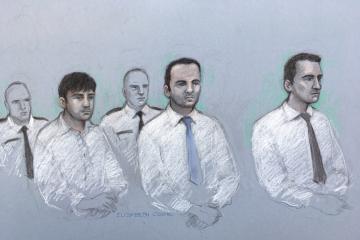 A TEENAGER has told jurors he thought police had “got the wrong person” when he was arrested over the death of PC Andrew Harper.

Albert Bowers, 18, was the front passenger in the Seat Toledo which dragged the 28-year-old Thames Valley police officer to his death by a tow rope.

PC Harper had got out of his vehicle to apprehend suspected quad bike thieves when he became tangled in the strap.

He was pulled along for more than a mile before he became detached, and died having suffered horrific injuries.

Bowers is on trial at the Old Bailey accused of his murder along with the driver Henry Long, 19, and fellow passenger Jessie Cole, 18.

Giving evidence at the Old Bailey, Bowers denied seeing or hearing anything strange when PC Harper was killed, amid the noise of the radio and shouting in the car.

When he was arrested over PC Harper’s death, he thought police “had the wrong person or something”.

He told jurors: “I feel terrible this happened. I wish it hadn’t.”

On the night of August 15 last year, Bowers had acted as the look-out as he, Long and Cole stole a quad bike from a property in Stanford Dingley, Berkshire.

Long had driven the Seat while Cole rode the bike towed behind by a rope attached to the rear.

Bowers told jurors: “When he said it, I did not know what he was talking about. I can see why he said it now. I could not see. All I could see was the front.

“When we pulled up I started to shout to Jessie to leave the quad.”

As Long pulled the car around the other vehicle, Bowers said he did not see anyone get out and only realised it was a police car when its blue lights started flashing.

On the fast-paced events, he said: “All of a sudden two hands came through my window. That’s when I realised it was Jessie trying to get in.”

Bowers replied: “Not that I remember at all. Everyone was shouting.

The defendant said he “grabbed” Cole and put him in the back seat so Long could drive.

Mr Raggatt asked: “At any point at all were you ever aware there was anybody else outside your car?”

He said: “No. Apart from Jessie I did not see nothing.”

As they made off, Bowers said the radio, which was tuned in to Kiss or Capital, was turned up and everyone was still shouting.

“I can remember saying to Henry to slow down because (of the) narrow roads and bends,” he said.

Mr Raggatt asked: “Did Jessie say anything about what happened just before he got in the car?”

Bowers said: “He did not say anything.”

He denied hearing anything unusual, saying: “There was too much going on in the car – Henry panicking and shouting and music loud.

“At that point we did not talk about the car, we just wanted to get home. It is hard to remember exactly what happened, so many people shouting. I was shouting, Henry and Jessie was.

“Obviously we knew it was police. We knew we were trying to get away because obviously we nicked the quad.”

ALSO READ: John Lewis confirms it WILL reopen Reading store but closes others nearby

Bowers said he never looked behind or saw anything “strange” throughout the whole journey.

Mr Raggatt asked: “Did you ever hear any other sounds apart from all of that?”

Bowers said: “I can remember hearing when we were going round the bend fast, the noise of the tyres because we were going so quick.”

He said: “Jessie was running towards the car and then something caused him to turn round and look back to PC Harper.

“The prosecution say once he got into the car he told you he had seen a police officer.”

Bowers denied the suggestion or that he had seen PC Harper himself.

The defendants, all from near Reading, have admitted conspiring to steal the bike but deny murder.

Long has admitted manslaughter but denies intending to harm the officer.