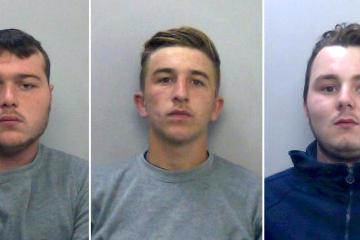 THE Attorney General has referred the sentences of PC Andrew Harper’s killers to the Court of Appeal under the Unduly Lenient Sentence scheme.

Henry Long, 19, was jailed for 16 years and 18-year-olds Albert Bowers and Jessie Cole were each sentenced to 13 years in prison for the manslaughter of the Thames Valley Police officer.

The case was referred to the Attorney General under the scheme which allows crime victims, their families, prosecutors or the public to ask for a review of sentences they believe are too low.

Suella Braverman can only ask the Court of Appeal to review a sentence she considers to be “unduly lenient”, usually in cases where the judge is believed to have made a mistake or imposed a sentence outside the range of what is reasonable.

Ms Braverman said: “This was a horrific crime which resulted in the death of a much-respected police officer while he was on-duty, protecting his community.

“Having personally considered the details of this shocking case, I have decided to refer the sentences of Pc Andrew Harper’s killers to the Court of Appeal.

“Attacks made against emergency workers will not be tolerated and offenders should be punished with the greatest severity for such heinous crimes.”

Bowers and Cole this week lodged applications with the Court of Appeal seeking permission to challenge their convictions and their 13-year jail sentences.

“My family and I know that the whole nation stands with us in outrage at the sentences handed down to my son’s killers.

“We can only hope that a fairer outcome is reached by the Court of Appeal to deliver the justice that Andrew deserves.

“As a family we will not stop campaigning until our blue light heroes are safer as they step out each and every day to protect us as a society.”

PC Harper’s widow, designer Lissie Harper, 29, has launched a campaign for a change to the law which would see those convicted of killing emergency workers jailed for life.

More than 350,000 people have signed an online petition calling for Harper’s Law and she is trying to secure a meeting with Home Secretary Priti Patel.

Lissie Harper said: “This is great news and we thank the Attorney General for her swift decision.

“The sentences for Andrew’s killers did not match their heinous crime.

“It was not justice and it needs to be addressed. Police officers need to be properly protected by the judicial system. And there must be appropriate punishments for those who would kill police officers.

“We now await the outcome with interest and in the meantime we will continue to campaign for Harper’s Law – which is calling for those who kill emergency services workers to spend the rest of their lives in prison.

“I would also like to thank the public for their continued and unstinting support.”