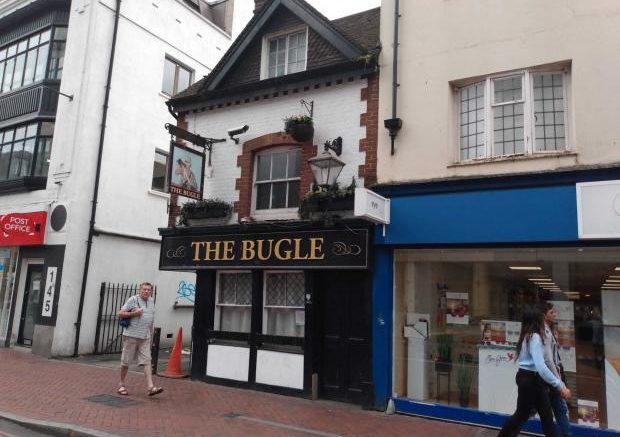 The street scene of one of the foremost streets in Reading town centre could change forever as ambitious plans for a new hotel have been submitted.

The new hotel in Friar Street would incorporate The Bugle pub but involve a major facelift for the neighbouring buildings.

Elsewhere, changes have been applied for at a 400 plus apartment development near the town centre, and a developer has applied to build a 14 home apartment block on land formerly used as a car park.

You can view documents for each application by typing the reference in brackets into the council’s planning portal.

A developer has submitted a plan to transform buildings in Friar Street into a 163 bed hotel with a lounge, bar and restaurant.

The hotel would be seven storeys tall and incorporate the frontage of The Bugle pub, which closed in October 2021.

However, the plan appears to show the Eyesite Opticians and Revolución de Cuba being evicted to make way for the hotel, which would be accessed from a new entrance, rather than through The Bugle.

The application has been submitted by the National Pub Portfolio, with the buildings currently being owned by Thackeray Estates.

Ropemaker Properties, which is currently building more than 400 apartments in Weldale Street, has applied to reduce the number of flats it is building.

In 2017, permission was granted to demolish the Iceland and Wickes on the site and build 427 apartments in three blocks.

Now, the developer has applied to reduce the number of flats to 418, and use freed up space on the ground floor to provide amenity space for future occupants in ‘Block B’ of the development, dubbed Foundry Quarter.

A similar plan (reference 220512), which involved building a gym, appeared in May but has been withdrawn.

The plan for 14 apartments, called Fatherson House, next to the ITS Building in Kings Road, Reading. Credit: Titan Property Development

Of those, seven would be one-bed,  five would have two bedrooms and two would have three bedrooms.

The block would be built on land in between the unique ITS Building and 300 king’s Road, which is currently overgrown and derelict.

The land used to serve as a car park according to Google Maps images from 2017, but has been sealed off since 2019.

Summerfield at 4 Kidmore Road, Caversham, the former care home which has been turned into a house. Credit: Google Maps

Colin Robbins, the owner of Summerfield at 4 Kidmore Road in Caversham has applied to confirm the change of use of the building from a care home into a house.

In 2019, an application was approved to convert the care home into eight homes.

This application seeks confirmation of the conversion and permission for a single storey rear extension.

It is understood the extension has already been built as a breakfast room for occupants.