Plans for two new Reading swimming pools were given the go ahead this week.

The committee also rejected plans to build 209 homes on the site of a former power station in Reading and ordered a takeaway to deal with a “pungent and overpowering” smell.

Here are the four big planning decisions that were made this week.

The council says construction will begin in the summer and it is aiming to open the new leisure centre in “early 2023”.

Rivermead Leisure Complex, which opened in 1988, will be demolished after the new two-storey leisure centre is built.

As well as a competition pool, the new leisure centre will contain a diving pool, a six-court sports hall, a 120-station gym, cafe and soft play area.

A 25 metre, six-lane community pool, gym, cafe and activity zone for children will be built at Palmer Park Stadium.

The car park will also be extended, to provide 131 spaces.

When the council closed Arthur Hill Swimming Pool in 2016, it was aiming to open a replacement pool at Palmer Park within four years.

The new facilities at Palmer Park are now due to open in 2023.

Cllr John Ennis said: “When you look at the planning application, it has a vision to create one of the best hubs of sport and leisure in the south, with a running track, modern facilities and a brand-new swimming pool, not a tired and small one that is past its sell-by date.” 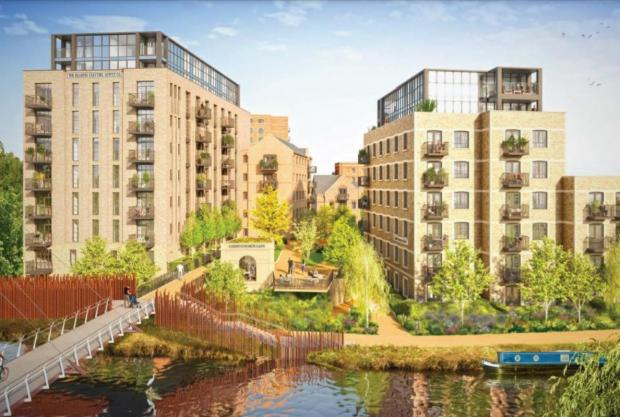 Berkeley Homes wanted planning permission to construct six blocks of flats and a riverside cafe on a vacant site in Vastern Road, that was once occupied by a Victorian power station.

According to the plans, the largest block would be 11 storeys tall and contain 78 flats.

To make way for the development, the company planned to demolish the three-story office building – that was recently occupied by Southern & Scottish Electricity Networks – and the locally listed entrance building.

READ MORE: Plans for 209 riverside homes in Reading are rejected

In a report, the officers said the developer failed to provide “a high-quality north-south link route” through the site and two of the blocks would overshadow the river and the Thames Path.

They also criticised the lack of affordable housing and said the retention of the locally listed building had not been “explored fully”.

The developer agreed to ensure around 20 per cent of the new homes (43 flats) would be affordable but with major developments, the council usually asks for 30 per cent.

Takeaway kicks up as stink

The company was ordered by the council to outline plans for an effective kitchen extraction and ventilation system before construction began – but it failed to comply with that order.

The council states the “works are unauthorised” and the owners responded by submitting a retrospective planning application.

But at a meeting on March 31, the council’s Planning Applications Committee said it could not approve that application until the owners have drawn up plans to install an effective odour extraction system.

That’s because people living near the restaurant have been complaining about a strong smell of burnt grease.

Cllr Tony Page added: “The smells are pungent and overpowering. The complaints we’ve had have not been exaggerated.”