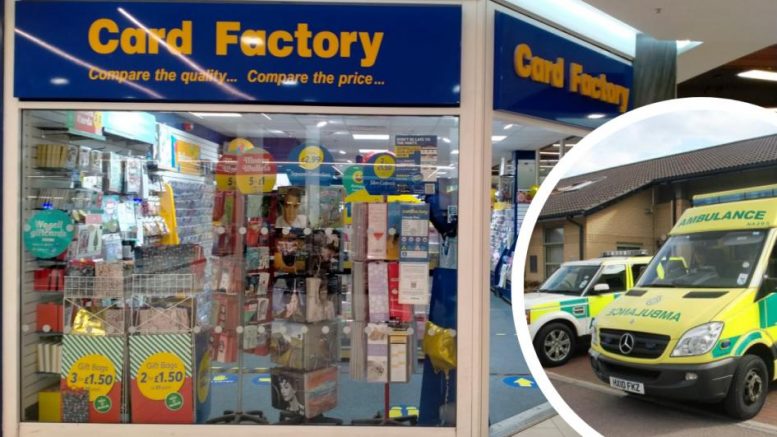 The ambulance service for patients in Reading has been slammed after a woman who suffered a seizure in a shopping centre was told she would have to wait two hours for an ambulance.

The wheelchair-bound woman was shopping in Broad Street Mall when she suffered a medical episode, which occurred at around 1.30pm.

It caused her to fall to the floor from her wheelchair, with shoppers Jason Collie and his wife Sarah swiftly offering their help.

But Mr Collie, 50, from Caversham, has slammed the South Central Ambulance Service (SCAS) for not reacting quickly enough, sharing his account following news that SCAS has been rated ‘Inadequate’ by the Care Quality Commission.

He said:  “My help was extremely rudimentary.

“I put her in the recovery position, made sure she’s breathing, that level of care.

“We gave the information we could over what in the circumstances seemed an overly long phone call.

“Eventually the call handler told the woman it would be two hours before an ambulance would be in attendance.

READ MORE: One in ten ‘non-urgent’ local patients had to wait eight hours for an ambulance, data shows

“It felt to me that [the] call handler was effectively trying to buy time for the woman to come around so the call could be effectively triaged down the priority queue.”

Mr Collie as since formally complained to SCAS following the incident that happened on March 25.

He said: “My complaint was not only on this individual job, my point is by even saying they’re a failing organisation is broken and needs root and branch reform.

“Nobody apart from a moron or a SCAS manager would think a woman in the middle of Reading losing consciousness should have to wait two hours for an ambulance.

“It reveals SCAS as an organisation is broken.

“Senior leadership should consider their positions. If they are in charge nothing will change.

“They’re failing people, they’re not doing what the public expect.”

Mr Collie has contacted Matt Rodda, the Labour MP for Reading East and Alok Sharma, the Conservative MP for Reading West, but claimed neither of them have shown sufficient interest.

He said: “If they won’t stand up for their constituents we really do have a broken system.

“They [SCAS] are unlikely to be under pressure to improve, they accept that’s how the situation is.

“This is not aimed at frontline paramedics, they do an amazing job. This is aimed at the people above them. The organisation has form.”

Her response points out that the woman in the wheelchair declined an ambulance, and eventually recovered without medical assistance.

The response also states: “It is no longer the case, in any of the NHS Ambulance Services, that an ambulance response is just immediately sent to each, and every 999-emergency call received, without a full triage of the needs of the patient and an assessment of the various alternative care

“Each call received is treated on its own merits, all are triaged using the

That system is NHS Pathways, which has assesses incidents in four categories:

The incident was assessed as category 3, but no ambulance was dispatched based on the woman’s wishes.

Mr Collie said: “At that point she took the not unreasonable view that she was not going to lie on the floor for two hours given she was back to consciousness.”

Responding to Mr Collie’s criticisms, a spokesperson for SCAS said: “The complaint letter from SCAS which has been shared by the complainant outlines in detail how we respond to patients and that the patient declined an ambulance.

“It also contains an apology for the concern caused but highlights that the call was handled appropriately for the reasons explained.”

Will Hancock, SCAS chief executive said an “extensive” improvement plan has been put in place following the ‘Inadequate’ rating from the CQC, which includes increasing capacity in ambulance crews and call centres, and improved processes for handling serious incident reviews.