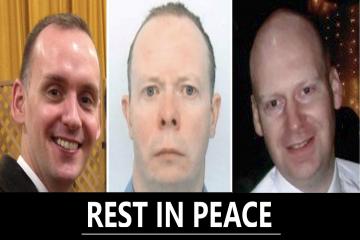 THE victims of Saturday’s terror attack will be honoured with a memorial in town, the council has confirmed.

The announcement follows a petition signed by more than 3,000 people which was launched to build a memorial in Forbury Gardens to commemorate the three men who were killed.

Reading Borough Council has since said plans for a permanent memorial will be organised as they work with the community and the families of the three victims.

Arya Babollah, 19, set up the petition after feeling “heartbroken” on the night of the attack.

‘I am proud of the heroes’: Counter terrorism boss praises Reading’s response to tragedy

Fundraiser set up for families of victims

He said: ” I realised that to help with the healing process, we all had to come together.

“The petition has allowed us the opportunity to do so.

“I hope that the way the community has come together is how we will always be going forward.”

He said the key aim for the petition was to amplify voices of the victims through tributes, bring the focus back to the victims amnd to spread awareness of the Reading community coming together.

Arya added: “I found out after petition started that one of the victims was a fellow US expat living in the area – Joe Ritchie Bennet.

“I didn’t personally know any of the individuals, but many have left tributes on the petition page.”

The council has since stated online that planning for a memorial will soon begin.

A statement reads: “Reading Borough Council shares in the grief of people in our town, and around the world.

“We will work with the community and the families of the victims to find ways to mark what has happened, and to ensure there is a permanent memorial where people can pay their respects to those who lost their lives, and everyone affected by the tragic events on Saturday.

“As plans develop over the coming days and weeks we will share those details widely.”