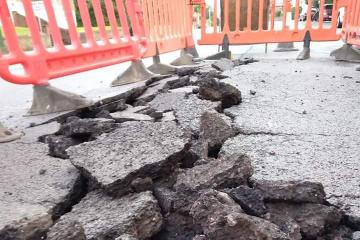 AN AREA of Castle Hill has been blocked off after a huge sinkhole opened up on the road yesterday (June 16).

Footage of the street, heading in to the town centre, shows the surface has cracked open to reveal a huge hole.

Today, the council confirmed that it is working with Thames Water to establish the cause of the damage.

Engineers from the water company will today carry out a follow up inspection after investigating last night and finding that pipes under the road appeared to be intact.

A Reading Borough Council (RBC) spokeswoman said: “Thames Water is carrying out a CCTV survey to the storm water drainage system and once we know the result of that survey we will be in a better position to establish next steps.

“The damage was barriered off and we would ask all road users to proceed with caution.”

A spokesman from Thames Valley Police (TVP) said: “This was an incident where a large sinkhole appeared in Castle Street. It was reported just after 4.30pm yesterday.

“Officers attended to assist with traffic.

“This has now been passed over to Highways to deal with the issue and police have left the scene.”